Yesterday, I wrote about the first part of my cycling holiday in Southeast Asia, a beautiful, complex, hot and intense week in Cambodia.  This is about part two of that trip, after we crossed the border into Thailand.

Our last day in Cambodia, we rode 30 km to the Thai border, the first 20 hilly and strong, the last 10 threaded through dodgy border traffic, especially trucks. At the border, we were handed off to a completely new set of guides and crew, our luggage walked across the border on a hand cart, like passengers on some secret railroad, where mystery lay beyond. 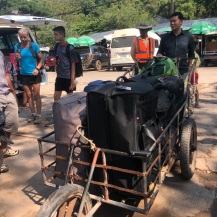 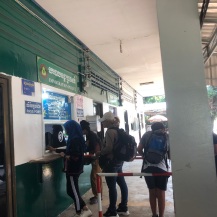 After some border nonsense (my fault — I had failed to realize I was supposed to make a second copy of my visa for leaving Cambodia), we followed our new guide across the border. Immediately everything was different. The roads were slick and paved, commercial brands lined the roads, and a shiny, organized and super professional guide replaced our opinionated, chaotic Cambodian head guide.

This transition was one of the most puzzling parts of the trip — it was one trip, with the same company. But not only did we switch over completely at the border, the guides hadn’t communicated — our itinerary and the Cambodian guide had told us we were riding 75 km that day. Thai Guide thought we had already ridden 75 km before the border and tossed us into the van for nearly 3 hours.  (It’s not unusual for cycling tour itineraries to differ immensely from what actually unfolds on the day, but it was very odd that guides from the same company leading the same trip treated the border like a sound barrier).

Our first major adventure in Thailand — after the long van ride, not so fun in tight sweaty bike gear — was a delicious lunch in an eco village, a boat ride and some Cultural Activities (which, puzzlingly, involved releasing farmed crabs into a mangrove forest).  We then rode a short, civilized 15 km tour around the local area, showing us typical Thai houses, dogs sleeping on the roads, temples, a reservoir, fields. 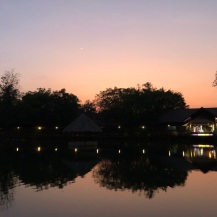 Our Cambodian guide’s style wasn’t very inclusive — typically, he would tear ahead with the German teenagers, dismissing the steady but slower group of women at the back.  Even when he was supposed to be the one sweeping, he would find a reason to leave us behind. New Thai Guide, we would learn, was more like a mama duck, keeping us in an even line behind him.  When the German boys started pushing him by pedalling faster behind him, when I told him he’d sped up to 27 km/hour from 22, he quickly slowed down.  It all felt so… calm.  Still work — there were hills, and it was hot — but so peaceful.

The two full days we spent riding in Thailand were holiday riding — significant distances of 60 km each day, but on forgiving surfaces, and at a pace that didn’t make us feel anxious about keeping up or being left behind.  Every break was at a temple, every meal as good as you imagine Thai food to be.  The second and last days, we ended at sandy beaches where we could plunge into the sea. 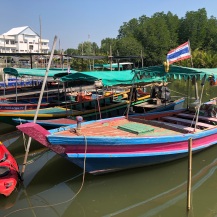 We did cultural activities — another boat ride, learning to make a hat in a muslim village, learning to make Thai rice cakes.  We looked at fish drying in the sun, and at shrines beside the road.  We ate vast amounts of prawns and seafood.  And then finally, we were dropped off in Bangkok to make our way to our next place. 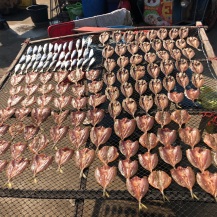 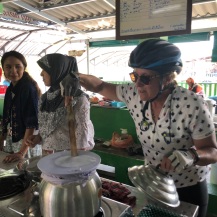 Ten days on a bike in SE Asia is an odyssey.  We started with the Killing Fields, blazing heat and almost unridable roads.  There were waterfalls, and campylobacter, and chilling homophobia and racism, and children riding bicycles back to school after lunch, drinking lime drinks out of plastic bags.  There were hungry and skittish dogs and cats, and dips in the sea, and chilli prawns and cheap beer.  It was good and I had the complete break from my overheated work life I needed.

I was really grateful to experience both countries, both very different, by bike — and I think it will be my last organized bike trip for a while.  I’m going to write about why tomorrow.

Fieldpoppy is Cate Creede, who lives in Toronto and has now had the privilege of visiting 65 countries.

One thought on “Riding in Thailand: serene and inviting”