It’s one of my favourite photos of me ever.  I’m sitting in the prow of a little wooden boat on a still river, sunset behind me, looking completely peaceful.  Our ride that day was hot and hard — hilly red-dirt roads with deep holes and dust, sun blasting down, giggles and loud greetings from children.  Wheels caught in sand.  Now showered and surrounded by jungle sounds and the whirr of the boat motor.  The picture of serenity, someone posted when I put it on IG. 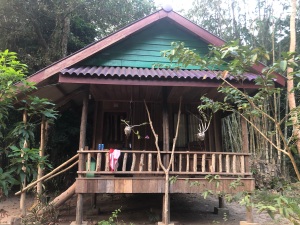 And it was.  And — it came after a day with one of the most unsettling homophobic comments I’ve ever experienced.  And I could feel a rumble in my guts that later turned into an all night bathroom odyssey, and a Christmas day spent sleeping in a wooden hut in an eco-village, surrounded by an overly complicated mosquito net.

That is cycle-touring in SE Asia in a nutshell, to me:  moments of bliss, hard, hot riding, immersion in the humid, all encompassing landscape of a land built on jungle, the putt of motorbikes behind you, pathways that are an imitation of roads, the warmth of mostly welcoming people, casual racism and homophobia, a constant game of roulette with your gut flora, always hot blasting sun.

Over the past five years, I’ve been privileged to do significant trips in Vietnam, Laos, Sri Lanka and Bhutan. I’ve borrowed local bikes to ride around the plains of Bagan in Myanmar at sunrise and sunset, the grey chill of Beijing, a night tour of Bangkok.  On this trip, we rode across the southern part of Cambodia and through eastern Thailand.  I’ve seen a lot of Asia — especially Southeast Asia — by bike, and it’s the most miraculous way to experience a country — the rhythms of the traffic, what the roosters sound like, how children react when you learn the local greeting, what the cats and dogs look like (mostly skittish and hungry), what burning rubbish smells like, what foods are in the roadside stalls, whether it’s mangoes or turmeric or rubber growing in the fields.  You see how people make their small livings, selling pieces of one pig with a scale by the side of the road, carrying a dozen bags of goldfish on a frame on a bicycle or motorbike.

It’s sublime, and it’s work — I found the physical effort of Cambodia difficult on this trip, more than I expected.  I don’t like off-road riding very much, and about 70% of the Cambodian part of this trip qualified as off-road, even when we were technically on a road.  I don’t like having to look at the road constantly instead of what’s around me, and I find it exhausting to get covered in red dirt under a blazing sun, to carry a mild buzz of anxiety about whether the water is clean enough, the fruit is peeled, the yummy local snacks contaminated.

The other tiring thing for me is being with a group.  I relax most by following my own rhythm, even when I’m doing something physically arduous.  Left to my own devices, on a trip like this, I would leave at 700 am when it was still coolish and ride the whole day’s ride before lunch, then chill in the afternoon.  That’s how I ride when I’m on my own. 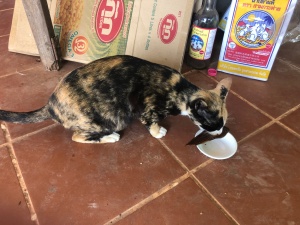 In Cambodia, we left at 830 most mornings, and stopped for Cultural Activities and lunch a lot of days, meaning we were riding on the hot rutted hills many afternoons.  The day after my Tummy Lurgy, I cut my ride short at about 40 kms, feeling lightheaded on the hills, choosing the air conditioned van and an early arrival at lunch, where I bought a local cat a fish.

I travel in a group in Asia because I couldn’t possibly navigate the route on my own.  I have ridden alone in Europe and Australia, but SE Asia is too hardcore for me — every time I encounter a person riding alone in Asia (invariably a man), they look feral and wild-eyed, over-baked and, usually, riding longer than planned.  (“I started in Bangkok and just kept going.  It’s been… I dunno, three months?”).  To see Asia by bike, I need the organization and container of a group.

The group dynamic can be challenging — my need to enjoy my time on my own and go to bed early can be interpreted by others as a rejection of their company.  On this trip, though, I had a new and unsettling dynamic that made the Cambodian part of the trip even more difficult to navigate.  Our local guide was an exuberant, self-styled comedian — introduced himself as Handsome Man, while saying many times that he was single because his skin was too dark.  He told a lot of long stories that ended with penis jokes.  He rode the pace that suited the teenaged sons of the German family, and left me and the three Irish women toiling to catch up continually on the offroads, and when I asked him to slow down, he just laughed.

There is a lot of casual racism and homophobia in Cambodia, with guides feeling free to comment “I don’t like Muslims” and to routinely insult each other with the term Ladyboy, with mocking effeminate gestures.  In the van one day, our Handsome Man guide somehow got onto the topic of homosexuals, mocking his “Ladyboy” nephew.  One of the Irish women said “you can’t punish people for how they were born.”  “Homosexuals should just die,” said the guide.  Giggling.

We started our trip with a visit to the Killing Fields, one of the most profound testimonials to what happens when one group starts to Other another.  And here I was, sitting in a van 40 years later, being laughingly told that another group should just die.

My sister and I were having a text conversation the other day about how so many Gen Z-ers don’t have gender or sexual orientation labels.  I was reminded, again — after my decade of annual trips to Uganda — that our privilege around gender and sexuality in the west is profound, and sharply demarcated.

This guide is from a traumatized culture, and clearly has a lot of unresolved issues with his own place in the world.  He confessed to me later — on that same serene boat ride — that he had converted to Mormonism, in a country where almost no one is a Christian, and his family were ashamed of this.  He carries a lot of shame, and American churches have a lot to answer for in developing countries.  (See also, the homophobic laws in Uganda).  But here I was, in a van controlled by a man who wants to be loved, who didn’t realize he was suggesting blotting out my existence.

I told him he was saying some very offensive things and he didn’t get to decide who gets human rights or not.  He laughed uncomfortably.  I put my headphones on and returned to my audiobook about Trevor Noah’s childhood in South Africa.  Watching the palms and fields go past, feeling the complexity of humans in their yearning and shame and brutality and love. 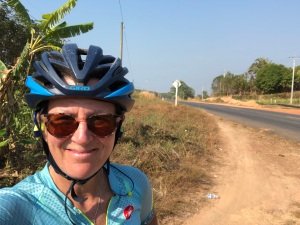 Fieldpoppy is Cate Creede, who lives in Toronto and has had the unbelievable privilege of riding a bike in at least 19 countries.

5 thoughts on “Riding in Cambodia”