I’ve been thinking a lot about disability and movement in light of Tracy’s worry that the language of “sitting is the new smoking” and “sitting kills” is ableist. I agree that there are problems with our public health messaging around improving our increasingly sedentary lifestyles. (Note my use of “our” in the previous sentence. Who is included? Who isn’t?)

On my recent post on modern chair design and the role chairs play in our sedentary lifestyle Tracy commented,

“I think this point about chair design is interesting and I like the change in emphasis, away from sitting and more oriented towards the way chairs would have us sit. I contacted Shelley Tremain (philosophy of disability scholar and disability activist; see her new series on the Discrimination and Disadvantage website: http://philosophycommons.typepad.com/disability_and_disadvanta/2015/04/dialogues-on-disability-shelley-tremain-interviews-bryce-huebner.html) this morning about to about it — I’ve learned a lot from her about ableist language around the “sitting is the new smoking” slogan which I for one will never ever use. She pointed out something that’s really important to note. The shift from sitting itself to the chair is an interesting shift, but it’s worth noting also that sometimes chairs (even those with fairly traditional designs, i.e. wheelchairs) actually increase mobility and make it possible for people who might otherwise not be able to get around or be active to do so. So the chair may have its limitations for some people, but for others they are a far cry from evil and in fact enable movement and activity and facilitate access to resources. Thank you, Shelley!”

You can certainly see ableist versions of the “move more, sit less” campaigns. As I’ve become more aware of ableist language in efforts meant to encourage everyday movement, I see the problems with phrases such as “sitting is the new smoking.”

First, there’s the issue of healthism.  See our blog post which talks about healthism and respectability here. Caring about your health is your choice. Smoking is wrong, in part, because it harms others. (This is a bit complicated in a country with publicly funded healthcare. Presumably this gives the government some scope to encourage people to make healthier choices.) But second, and more importantly, sitting isn’t bad for everyone. For some people it’s the best choice. Think about a wheelchair user for whom sitting in a chair opens up a world of mobility and choices. That’s not unhealthy. It’s liberating.

I’ve watched how this plays out in campaigns about using the stairs.

See this poster which many friends shared with the comment, “Real super heroes don’t make ableist assumptions.” After all, not everyone can take the stairs. Indeed, when my knees are bothering me sometimes I’m not able to use the stairs even though I can bike hundreds of kilometers. 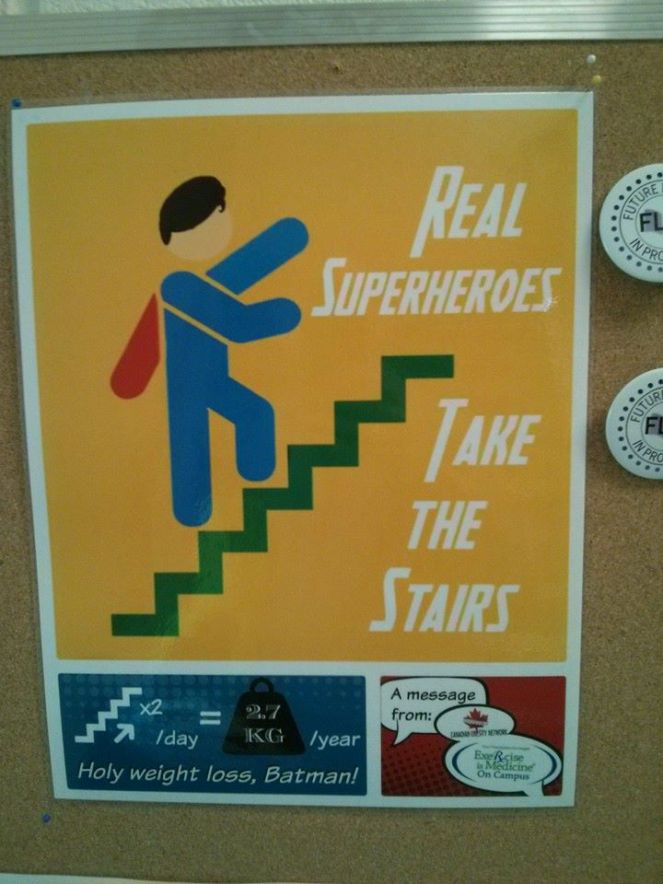 It’s certainly true that wheelchairs can be wonderfully liberating things. See the other Samantha’s post about the Warrior Dash. That wouldn’t have been possible for Samantha without her wheelchair.

But I also worry that mainstream discomfort with non standard modes of movement can keep wheelchair users inactive. The message seems to be if you can’t walk, you use a wheelchair, even if that’s not the option you’d prefer.

One of my favorite characters in the documentary Fixed, which by the way, you must watch, it’s a wonderful film, is Gregor Wolbring a professor at the University of Calgary. He uses a wheelchair but it’s not his only way of getting around.

I love the scenes of him at home, getting in and out of his car, and boarding a plane crawling up the steps and down the aisle to his seat. At home he quickly sheds the wheelchair and gets about his house under his own steam. His movement is graceful and speedy but it challenges our stereotypes of how the human body moves. Watching him board the the plane I wasn’t sure if it was the air line staff who were uncomfortable with the way he climbed the stairs into the plane or if it was me.

I’ve watched the film a few times now because I use it in class and I’ve wondered about my unease. Partly it’s fear of Gregor Wolbring falling but that’s clearly ridiculous. We’ve both been getting about using our preferred modes of mobility for some number of decades. I hope no one worries about me falling when I climb stairs.

Is it undignified? That’s clearly an ableist thought. How do standing and walking come to signify “dignity”?

It seems we have two acceptable modes of being, walking and wheeling. But wheeling isn’t the only option for those who can’t walk. Our discomfort with crawling shouldn’t be the thing that keeps people still when independent motion is the option they’d prefer.

Fixed makes the point that there is incredible variation in human abilities. We should delight in variety, not shy away from it. It urges us to resist the urge to pick one standard and “fix” everyone who doesn’t meet it.

I think this about size. So too with mobility.

Finally, there’s the worry that things that are wonderful for some people–moving sidewalks in airports, elevators in private homes, even second floor laundry–aren’t wonderful for others. How do we celebrate increased accessibility without turning into a country where we all use moving sidewalks and elevators? Yes, let people choose. That’s obviously right. But we need to encourage a culture of movement in its many forms and varieties.

I’ve spent a fair bit of time with some amazing disabled cyclists. In Australia I rode with Michael Milton, a one legged cyclist. I’ve raced crits with him, he’s not slow. He doesn’t generally use an artificial leg which surprises people and I’ve never seen him in a wheelchair. Mostly he uses his bike for transportation.

Who is Michael Milton?

Let’s move, yes. But let’s celebrate human diversity too. It’s not all a matter of sitting or standing, taking the stairs or taking the elevator. Let’s embrace all the options.

8 thoughts on “Movement and disability: Does mainstream discomfort keep those who crawl immobile?”