Along with a whole pack of people I know, I’m doing the 30 Day Home yoga journey with Yoga with Adriene.  As always, Adriene and her dog Benji are delightful, and I love the way that even though we’re all doing this in our own spaces, I have a shared experience with people who are new to yoga, people who are deep into yoga, people who are in my city and people just out there (waving vaguely) in the world.  I need that in the dark and cold of January (both physical and metaphorical, these days).

I started the year in a very different yoga space, though:  with 108 sun salutations, on my own.

This is a thing that people do to mark transitions — one of the yoga studios I practice at hosts a class at the solstice (and I think at the equinox), a class Nicole has gone to. And Tracy has done self-guided practice a couple of times.  I did it last year, on Christmas morning.

The reason for 108 is one of those fuzzy “sacred” things that has been translated through a western lens so many times I don’t trust it at all — here’s one explanation I found online:

108 has many sacred connotations in various cultures and philosophies. Renowned mathematicians of Vedic culture viewed 108 as a number of the wholeness of existence. This number also connects the Sun, Moon, and Earth; the average distance of the Sun and the Moon to Earth is 108 times their respective diameters. Such phenomena have given rise to many examples of ritual significance.

According to yogic tradition, there are 108 pithas, or sacred sites, throughout India. And there are also 108 Upanishads and 108 marma points, or sacred places of the body.

Okay.  I’m not going to ask an astrophysicist to validate those claims, and I’m not trying to emulate a spiritual tradition that’s not mine.  I like the practice because it provides a robust, ritualized commitment of time, energy and effort.  I like repetitive movement that enables me to go deep into my body, presence without thought.  And 108 is long enough to create multiple waves in the experience without being over-strenuous.  It’s about the length and physical effort of an intermediate flow class, but with a steady rhythm that creates a true meditative state.

The first time I did this practice, I was in Australia, doing the sun salutations on a grassy spot at the top of a hill out of sight of most of the people at my hotel.  The second time, I was in downtown Singapore, at the rooftop pool of a really nice boutique hotel — the kind of hotel that provides a yoga mat in every room, tucked into a cunning little space under the bed along with an umbrella and a folding ironing board.  (And yes, I realize how privileged I am to be able to type these sentences ;-)).

I’d been up on the rooftop at midnight the night before, watching the incredible fireworks. 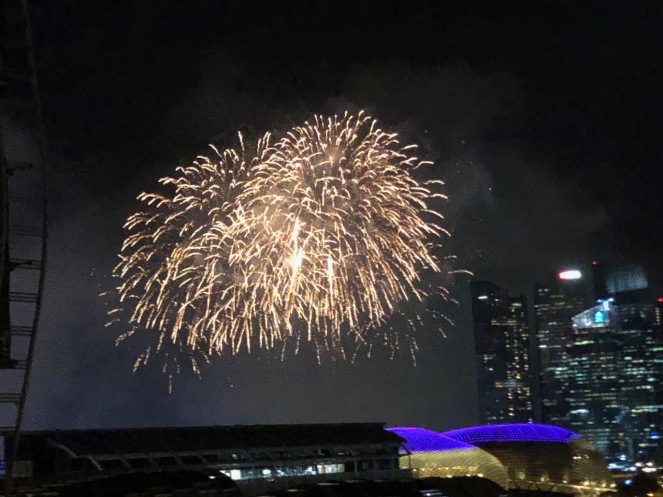 Now, the space was impeccably cleaned up after the party.  Singapore is hot, but there were ceiling fans and shade. And a pool beckoning me for a splashy finish.

I was alone when I started at around 930 am on New Year’s Day, my little pad of paper to track my progress and bottles of water on the table.  I started with some trepidation — it’s a lot to contemplate! — and my body was tired from my bike trip and two weeks of travel.  It was hot. I worried about having enough water, about privacy.

After about 10 vinyasas, I realized I needed a towel under my sweaty palms.  I also started to feel the blisters under my right big toe and my pinky toe start to get more raw.  I put on my favourite podcast, letting Krista Tippett  float in and out of my consciousness.

Around that time, people started to show up to sit by the pool.  I tried to ignore them, but noticed that their presence made me super self-conscious of the noises I was making — little grunts when I hopped to the front of the mat, sharp exhales of breath when I felt my hamstrings tug, sharp intake of breath when the raw part of my toe started to burn more.  I also noticed that their presence made me more conscious of form — no one was watching me, but I felt my shoulder blades move further down my back in up dog, my butt angle more sharply into a tighter down dog, my back flatten in the high lift.  Shadow teacher with a hand on my back.

The previous time, I’d found myself doing annoying mental math to track my progress.  This time, I’d prepped my tracker in advance:  little squares to cross off for every 5 sun salutations, in sets of 5, with two squares for four, one of which I crossed off at 54, to know I was exactly at the halfway point.  This system alleviated the flickers of distraction I’d had the previous time.  Five is easy to keep track of, and stopping to make the x gave me a chance to have a sip of water.  (Did I mention it was hot?)

Halfway through, I desperately needed to pee.  I actually stopped to pee vigorously three times during this practice — I’m sure there is some physiological reason for this, something about lymph.  There is definitely something about churning up the fluids in my body.  At one of the points when I stopped to put on my flipflops and go to the restroom, a woman sitting with a book asked me if I wanted her to take my photo.  Her English was thin, but she was clearly my champion.

I felt self-conscious, but I let her take photos with my phone for a set of five.  I’ve never had photos of my actual practice before, and looking at them, it’s like an inverse lens from what I feel like inside my body —  to my surprise, I kind of look like a yogi. 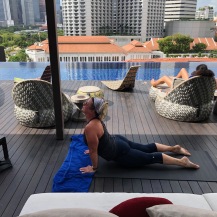 The first time I did this practice, it felt more like a trudging marathon, a strange sensation that I never did a single “perfect” sequence in any one of them.  I let the unfolding of my imperfections be the experience.  This time, even with the distractions, the heat, the peeing, I felt a different kind of flow.  I wasn’t tracking whether I was doing it “right” — I was just going deeper.

That’s a good lesson to hold for the start of a year that has already demanded a lot of holding our expectations lightly.

Have you ever done 108 sun salutations?  What did it mean to you?

Fieldpoppy is Cate Creede, who lives in Toronto, where she’s going to stay for a while.