But beyond the decision whether to listen to music or not, there’s a whole other question: what do you put on your playlist?  I’ve read stuff about recommended beats per minute and how it can boost your running performance by as much as 15% if you choose right. I don’t doubt that there is something to that. Articles abound listing songs that are guaranteed to make you run faster. See here and here and here.

That’s never been my main goal with my running music. I just want to like it.

I had my old playlist for years (I know). It started with “Stairway to Heaven” (I still think it’s a good start, but that’s not how my Summer 2017 playlist begins), followed by “Happy” and later on, just when needed, “Gonna Fly Now” from the movie Rocky. I’ve been wanting to change it up for over a year (I move slow on some things lol).

So I put it out there to my friends one day on social media: What are the top three song on your current running playlist? I didn’t define the sense in which they had to be “top.” I just wanted some suggestions to get me started. And the suggestions came!

One thing is for sure: people love chiming in on requests like that because everyone has their favourite tunes that they like to run with. I am not really “up” on the latest music. I like music and often have it running in the background, but I don’t keep up with trends and it sometimes takes me a long time to figure out the names of songs I hear being played. Getting recommendations from friends helped a lot. I discovered some new music that has made its way onto some of my other playlists (the ones not just for running).

My approach in putting together the playlist was to listen to all the suggestions and drop each one I liked into a Spotify playlist I called “Tracy Running Summer 2017.” It’s public, so feel free to follow it. It’s not static, in that I’m still working with it and I have shifted things around a bit and it’s still evolving in content and the order of the content.

It starts off slow and steady, with Emmylou Harris singing “Wandering Stranger” followed by Elle King, “Ain’t Gonna Drown.” These are easy going songs that aren’t going to work for you if you’re out the gate super quickly. I’m into a gentle start, and I love both of these songs, and they sort of lull me into my run (which may not be everyone’s preferred approach!).  The pace picks up from there, and by the time you get to Katie Herzig, “Best Day of Your Life,” you’ll be trotting along at a good pace I promise you, and you’ll feel a surge of joy (maybe, if you’re like me and can’t help but feel joyful when listening to “Best Day of Your Life.”

My playlist has two followers so far: Sam and Anita (such loyal friends). Sam says she likes it. Anita said her family got a kick out of it on a road trip a couple of weeks ago and her girls wanted to know if I was aware of what some of the rap songs were actually saying (I’ll have to listen more closely to that Eminem). There’s not a whole lot of rap or hip hop (I’m sorry I don’t quite know how they differ) on the playlist. 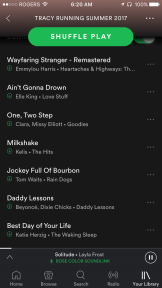 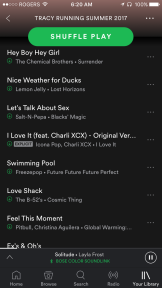 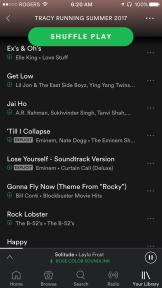 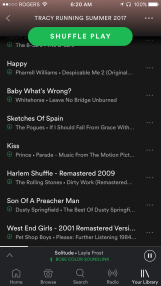 So that’s my running playlist. Like I said, it’s ever evolving and I’m going to be making a new one in the Fall. I’d love to hear new suggestions either to add to this one or to file away for later.

What’s on your current playlist? I’d love to hear about three of your favourites and any strategies you use for selecting tunes.

5 thoughts on “Tracy’s Summer 2017 Running Playlist. What’s on yours?”