Every so often, the US government convenes an expert panel to gather the newest research in order to review and revise its dietary guidelines. The newest version, out this week, is here.

News flash: the main message of the report is this:

We shouldn’t drink much alcohol, either.

The guidelines don’t say anything about laughing while eating salad alone, but I’m sure that can’t hurt. 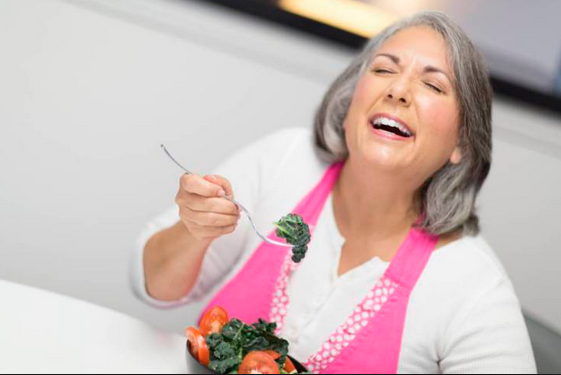 With that level of advice, one wonders how much money the US government spent on such shocking news for the eating public. But they did lay out some dough for this lovely graphic below:

So eggs are back in favor. Eggs were in trouble in 2012, when the press reported the results of a study  concluding that eating egg yolks contributes to atherosclerosis (plaque build up in arteries, increasing risk for heart disease) almost as much as smoking. Yes, you read that right. Almost immediately, the study was shown to have many limitations. Basically, researchers interviewed a bunch of patients with heart disease and asked them, “hey have you smoked?” and “hey, have you eaten a bunch of eggs?” Because many of those patients answered, “uh yeah, I think so”, the researchers made this conclusion.

Well, of course it wasn’t exactly like that, but it’s not that far off as a description.

I bring this up because, for me, the eggs-good-eggs-bad-eggs-good nutrition pendulum is emblematic of the problems with nutrition and dietary research. In brief, here are three contributing problems.

There’s a great article out this week from FiveThirtyEight (thanks, Matt, for telling me) that is both informative and amusing (a worthy goal for all of us writers); it talks about the ways nutrition researchers gather evidence for studies. One way (that divides up into some different methods) is to ask people what they ate recently. It turns out that people’s reports aren’t very reliable—they overestimate amounts or frequency of some foods and underestimate others. Another way is to enroll people in lab studies where their food intake is totally controlled and monitored. This is a problem because results based on those studies don’t apply well to eating in the real world.

The fivethirtyeight folks also did their own food research and ran some analysis to find correlations (these people know from statistics) and released this table with lots of specious correlations. The small p-values on the right indicate that they have very strong evidence for those correlations. However, there’s no reason to believe that consuming table salt has a real-life connection to having a positive relationship with one’ internet service provider. In sum, all sorts of relationships can be found, but targeting the important nutritional ones is very difficult, more so given the sorts of evidence we have been able to gather. 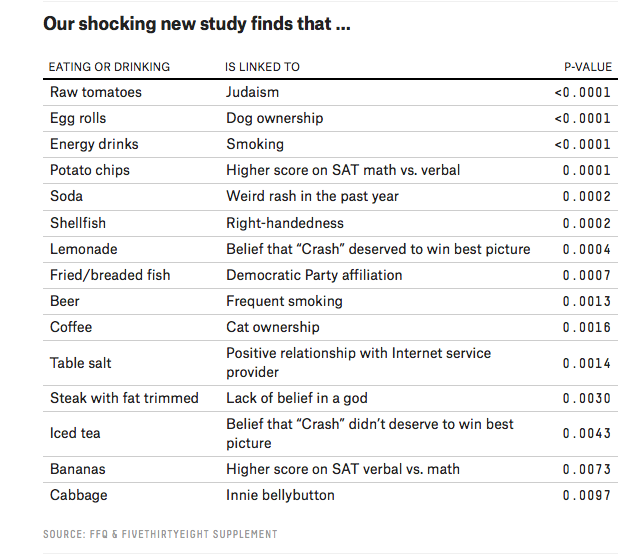 As soon as the guidelines came out this week, there was a spate of harsh criticism, charging the various food lobbies (meat in particular) with using their influence to obfuscate or bypass the scientific committee’s results (found in their report here). One consumer website here said this:

Some public health observers see a big win in these guidelines for the meat and soda industries. Harvard’s Walter Willet commented that “there are clear benefits of replacing red meat with almost any other protein sources — but the meat lobby is very powerful in Congress. The Dietary Guidelines Committee was also quite explicit in their recommendation to limit sugar-sweetened beverages, and that’s not talked about in the guidelines at all.”

If you’re looking for even more fiery criticism, look no further than here for a knowledgeable if vitriolic political critique. A couple of highlights: the author David Katz points out how the guidelines talk about emphasizing “nutrient-dense” foods and reducing sugar intake and saturated fat intake, when the scientific report language was much clearer: processed and junk foods and red meat and processed meat intake should be reduced, as well as consumption of sodas and other sugar-sweetened beverages. But the food and soda lobbies are powerful and were successful in getting the language of the guidelines to be vague or not helpful to consumers. Read the guidelines for yourself here and see what you think.

3. Nutrition guidelines make all sorts of values claims and value judgments about foods.

In the guidelines, the messaging is that many foods are considered “good” or “bad”, which makes eating seem like a moral act. And that’s weird and bad for us. Tracy has blogged a lot about the destructivenesss of the “good/bad” dichotomy for foods. Here and here are just a few of her posts on this topic. For me, setting up foods as being “good” or “bad” is a quick prelude to setting myself up for being “good” or “bad”, depending on which foods I happened to eat that day. Trying to live a life with meaning, productivity, connection and satisfaction is hard enough for all of us. Why add this other burden of trying to be a “good” eater? Yes, we want to be healthy (whatever that means to each of us), and happy (ditto). There are lots of paths to those goals. Guidelines can be useful, especially when they’re backed by strong science. But moralizing them is beyond the bailiwick of science, and in general a bad business for our well-being. So eat eggs, don’t eat eggs—it’s up to you.

5 thoughts on “The new US dietary guidelines, or: just tell me—are eggs good or bad this year?”