Winter arrived early in our part of the world. The local ski hill set a 25 year record for early opening. But that’s left lots of us cyclists wondering what to do in the winter. Here’s the options I’ve tried. And I’ll probably do some combo of 1, 5, 6 and 7 this winter. Two is always tempting though.

1. Toughen up and ride outside: Here’s Dave and me last January 28th! It warmed up to -5 so we did the short Belmont loop. For a few years I commuted year round and rode my bike lots in the snow.  I have a cyclocross bike for longer rides with not much snow and a mountain bike for when there is actual snow on the road. These days I’m driving teenagers around so don’t get the chance to bring my bike to work as often as I’d like. But I still love it. Some my best winter rides have been in snow storms when cars stay off roads altogether. The other day my normal 20 min car trip turned into an hour with the snow and I was passed by four bikes. I was so jealous. The downside, as with winter outdoor running, is that every ride is a slow ride. You need to save the speed work for indoors.

2. Find a velodrome: Here’s me riding at the Seddon Park Velodrome in Dunedin, NZ. It was lovely. I love riding outside and I love track cycling so this combined the best of both worlds. It was odd to have wind on the track. But that won’t work so well in Canada. Winter, snow, etc.

Luckily we have an indoor one in London, Ontario, The Forest City Velodrome.

For quite a few winters I rode a track bike inside at the Forest City Velodrome and though it’s scary (see info on the banking above, it’s like riding inside a wooden salad bowl) I haven’t given up and sold my track bike just yet. I always feel I’m on the verge of going back but there are things that keep me away. It’s quite a drive from my house, at the wrong end of town from all my kids’ activities, it felt more like a family thing when spouse and one child were doing it too but now it’s just me, and it’s in the evening, and there weren’t many women, and I’m revv-ed up enough after that I can’t sleep until late.

But soon Milton, Ontario will have one too. I’m jealous because that one will be 250 m–the standard distance for tracks for Olympic track cycling– and considerably less scary!

3. Spin classes: There is (thankfully) no photographic evidence of this period of my life but for a few winters I did regular spin classes. I loved the loud music and I liked spinning fast but I’m not convinced it’s great bike training and mostly, I’d rather be outside.

4. Buy a trainer: Like spinning but with your own bike at home. It’s bad for your wheels so be sure to get a set of wheels just for using on the trainer. It would bore me to tears. And with no companions in misery, I think this would be a bad fit for me.  The only time I’ve done this successfully has been for group workout sessions with other cyclists. I’d love to use this training series though, Sufferfest.

Even the name resonates with me but then I like painful workouts. See why here and here.

5. Ride the rollers: I don’t have a trainer at home but I do have rollers.  For the differences see Rollers or Trainer?. This bit especially resonates with me, “One thing I love about rollers is that there is zero downtime and your training is very efficient.  Every minute that you’re on them you are spinning with perfect technique and not slacking off.   There’s a saying that 90mins on the road is equivalent to 60mins on the rollers. I find that the increased concentration that rollers require make them a little less boring and easier to handle mentally.”

Also, this: “The faster you go, the more stable you are.  It’s not as difficult or scary to learn how to ride on rollers as you may think at first.  It’ll take you 2 or 3 sessions before you get the hang of it.  Try starting out by setting up in a doorway where walls are close by. Contrary to popular belief, if you happen to fall off your rollers, you won’t go flying into the television set and through the wall.” I love my skinny hallway.

I haven’t used them yet this year, but soon….

I can’t spin this fast though.

Here’s a good how to video.

6. Do something else instead and call it “cross training” if you want to be fancy. My favourite is cross country skiing! In fact members of one of the local bike groups switch to cross country skiing over the winter and the outings have much the same flavour: outdoor exercise, companionship, breakfast! 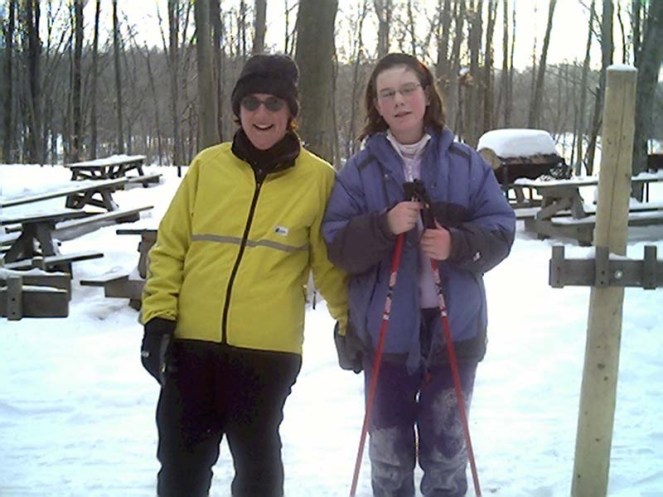 7. Escape the snow and the cold: This year we’re heading to Arizona again for a week of riding in beautiful warm desert country. See Bike Escapades Arizona tour.  See Cycling holidays, Part 2: Organized tours in which other people carry the stuff. This isn’t an option we can afford every year and I know lots of people can’t afford it all but if you’re looking to get away from Canadian winter and snow, Arizona is a great place for road cycling. (Mountain biking too, I hear.) Other locations on our winter holiday wish list for cycling: Cuba (of course) but you need more than the university break which is all I have, California, New Mexico and maybe some of the south east states too…

6 thoughts on “Seven winter cycling options (I’ve tried them all!)”