Big news last week: worldwide, today’s children are less fit than their parents were at their age. What the news report said:

An analysis of studies on millions of children around the world finds they don’t run as fast or as far as their parents did when they were young.

On average, it takes children 90 seconds longer to run a mile than their counterparts did 30 years ago. Heart-related fitness has declined 5 per cent per decade since 1975 for children ages 9 to 17.

Most kids just aren’t getting out and about as much as is recommended. Children over the age of six are supposed “get 60 minutes of moderately vigorous activity accumulated over a day. Only one-third of American kids do now.”  And the news is not much different in Canada, Europe, Australia, New Zealand, and Asia:

The new study was led by Grant Tomkinson, an exercise physiologist at the University of South Australia. Researchers analyzed 50 studies on running fitness — a key measure of cardiovascular health and endurance — involving 25 million children ages 9 to 17 in 28 countries from 1964 to 2010.

The studies measured how far children could run in 5 to 15 minutes and how quickly they ran a certain distance, ranging from half a mile to two miles. Today’s kids are about 15 per cent less fit than their parents were, researchers concluded.

“The changes are very similar for boys and girls and also for various ages,” but differed by geographic region, Tomkinson said.

The decline in fitness seems to be levelling off in Europe, Australia and New Zealand, and perhaps in the last few years in North America. However, it continues to fall in China, and Japan never had much falloff — fitness has remained fairly consistent there. About 20 million of the 25 million children in the studies were from Asia.

Fitness is “pretty poor in adults and even worse in young people,” especially in the United States and eastern Europe, said Dr. Ulf Ekelund of the Norwegian School of Sport Sciences in Oslo, Norway.

World Health Organization numbers suggest that 80 per cent of young people globally may not be getting enough exercise.

In 2011, Statistics Canada said only seven per cent of six- to 19-year-olds were active enough to make health gains.

On Monday, the “Active at School” campaign spearheaded by Canadian Tire and supported by the federal government launched to get schools to devote at least an hour a day towards physical activity for students.

A report on Canadian children specifically finds them to be “woefully inactive.”

I remember childhood as a time when I was on my bike or swimming all summer. It was routine to spend an entire summer day in the lake or the pool, or riding our bikes all over the neighborhood, roller skating up and down the cul de sac around the corner. Come fall, we raked leaves and went on hikes to see the colours. In the winter, we flooded the yard to make skating rinks, went cross country or downhill skiing, built snowmen and forts. And as soon as spring came, out came the bicycles again.

Even when we were indoors, there was a lot of running around the house playing tag, or staging dance shows that took hours and hours to choreograph. I was never much of an athlete, but I really loved my dance lessons and put them to good use.

So why are kids not getting the activity they need? This article says:

Children are much less likely to walk, bike or skate to school than they were in the 1970s, at least in the U.S., Canada, Australia and the United Kingdom. Neighborhoods are increasingly suburban, especially in Asia, and people are driving more.

And from the 1970s till now, the number of global households with TVs, VCRs, computers, Internet access and video games has soared.

Aerobic fitness is suffering because of more screen time, less time in active play.  The researchers also linked the difference between kids today and kids a few decades ago to an increase in childhood obesity. Before we start sounding the alarm bells and pressuring kids to lose weight, let’s remember that not all messaging is equally successful in getting people to be more active. See my post about that here. It would be super-sad to see this news turn into an opportunity to fat-shame our children.

If we agree that fat-shaming and throwing up our hands about “the obesity crisis” is not the way to go, then we just need to get the kids moving more. None of the activity I remember as a kid ever had anything to do with weight loss or maintenance. It was all fun.

One thing we can do for our kids is be good role models. Aviva guest posted about her amazing mother earlier this summer.  If we stay active, that sends a good message to the kids.

We can also take it a step further, not just aiming to be role models but also doing things together as a family.  I have great family memories of swimming together, going on ski trips, and lots and lots of walks (we still go for walks together today whenever I see my parents).

Sam posted about families and fitness last December. See what she had to say here.

And as we like to say on this blog, it’s got to be fun.  It might not be fun every single second, but we need to find activities that we enjoy, and kids are no different. Some kids will prefer dancing to soccer, so let them dance!  Others would rather dive than swim.  Participaction has a “bring back play” campaign to try to promote 60 minutes of physical activity a day for kids.

I love this idea of bringing back play, and of doing things together as families, and helping our kids find activities that they can enjoy and feel good about.  Let’s hope that in twenty years, we’ll see that this downward trend was just a blip and that we can revive the idea of active play. 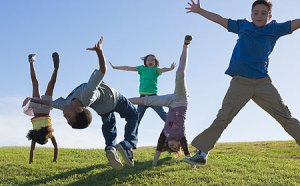 5 thoughts on “Kids These Days!”