My plan for February was to do a little work on my upper back mobility every day.

Alas, that plan did not take into account the fact that February messes with me every year.

(I can’t really explain how it messes with me. It’s some sort of mid-winter slump combined with an odd sense of shortened time. Anyway, I have made note in my calendar to take it into account next year!)

But I didn’t get upset with myself about being less diligent than I had intended. I just did my stretches, movements, and yoga whenever I had the capacity and wherewithal to do so.

It turns out, though, that my lack of capacity for daily work on my upper back actually helped me to identify one of the underlying causes of my tight muscles.

Since I was aware that I wasn’t doing the stretches and everything that I intended to do, I really started paying attention to when and how my upper back felt the worst.

And observing that ‘when and how’ led me to realize that not only was my chair in my home office too low and at a bad angle for my back but my monitor was at the wrong height.

So I elevated my monitor and I switched out my chair for one that was less fun but better for my back.

Now, I’m not saying that this fixed the problem entirely. My upper back still needs me to do the stretching and yoga. I still need to pay attention to how I’m holding myself and how long I am sitting in one position.

But addressing that underlying cause of at least part of the problem has made an incredible difference.

It’s not just that my upper back feels more mobile and less tight, I feel better overall. I have had fewer of the specific type of headache that generates from a tight upper back and I feel more relaxed.

So even though I didn’t follow my exact plan I still got where I needed to go.

And I’m calling that a victory.

Chairs are evil, I  tell people. I often fantasize about a house with minimalist furniture. I’ll blog about the furniture free tiny house of my dreams sometime. But that’s for another day. 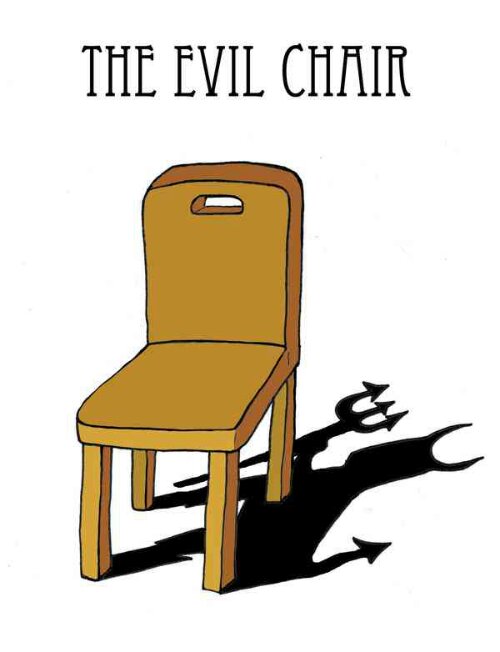 We all know the dangers of sitting. But according to Colin McSwiggen, recent studies and reporting about sitting describe the problem in ways that mislead. He writes, “They make it look like the problem is just that we sit too much. The real problem is that sitting, in our society, usually means putting your body in a raised seat with back support — a chair. Sitting wouldn’t be so bad if we didn’t sit on things that are bad for us.”

But you might wonder, what’s new about this? Weren’t there always chairs? How are we just learning now that they’re bad?

First, chairs aren’t universal. In lots of places people engage in what erognomics types call “active sitting.” Squatting, sitting cross legged, leaning….all of these postures are a bit like sitting but they aren’t bad for you the way chair sitting is. Indeed, if McSwiggen is right we should swap slogans. It’s not sitting that’s the new smoking. Rather, it’s chairs that are the new evil. New? Yes.

Second, according to McSwiggen’s fascinating history of the chair, Against Chairs, they’re also a relatively new thing. he dates the mass adoption of chairs to the Industrial Revolution.

“Suddenly chairs were being made cheaply in factories and more people could afford to sit like the rich. At the same time, labor was being sedentarized: as workers moved en masse from agriculture to factories and offices, laborers spent more and more time sitting in those newly mass-producible chairs. As usual, class aspirations determined what people bought: body-conscious innovations like patent chairs, which were adjustable, and rocking chairs, which encouraged movement, sadly received only marginal acceptance from the wealthy and saw limited use.

And so it was that from the turn of the twentieth century on, chairs had society in their clutches.”

Third, you might be tempted to think the answer lies in a better chair. But it’s not clear what a good chair would even be. You’ve all seen the many variations: the kneeling chair, the stability ball as chair, the wobbly stool as chair..to list just some examples. My favourite which I’d buy if I could get one in Canada is the Hokki stool. I’d like a red one.

Here’s McSwiggen again on the range of chairs out there:

“No one even knows what a “good” chair would have to do, hypothetically, let alone how to make one. Some ergonomists have argued that the spine should be allowed to round forward and down in a C-shaped position to prevent muscular strain, but this pressurizes the internal organs and can cause spinal discs to rupture over time. Others advocate for lumbar support, but the forced convexity that this creates is not much better in the short run and can be worse in the long: it weakens the musculature of the lumbar region, increasing the likelihood of the very injuries it’s meant to prevent. There are similar debates over seat height, angle and depth; head, foot and arm support; and padding.

Galen Cranz, a sociologist of architecture and perhaps the world’s preeminent chair scholar, has called ergonomics “confused and even silly.” For designers without a scientific background, it’s a clusterfuck.”

It’s clear we aren’t getting rid of chairs anytime soon. I work at a standing desk and love it. I eat some meals standing up. I try to watch shows on Netflix while engaged in more active sitting (and foam rolling) but even with all these efforts it’s tough.

Again McSwiggen: “I’d love to end this essay with a cry for a cultural shift away from chairs and toward more active sitting, on the floor or squatting or whatever, but really, we’re stuck with this shit for a while. The best we can hope for from chairs right now is a lesson on the dangers of fashion and a historical counterexample to the myth that the public acts in its own collective interest. If you want to sit healthily, you’ll have to take matters into your own hands; the best habit to develop is not to stay seated for more than ten minutes at a time.”

Christmas dress!
Walking home in the snow
Lessons learned from dog sitting
Plank challenge with bonus dog assistance
Good advice for teens and all of us really
Top ten posts of the month, November 21