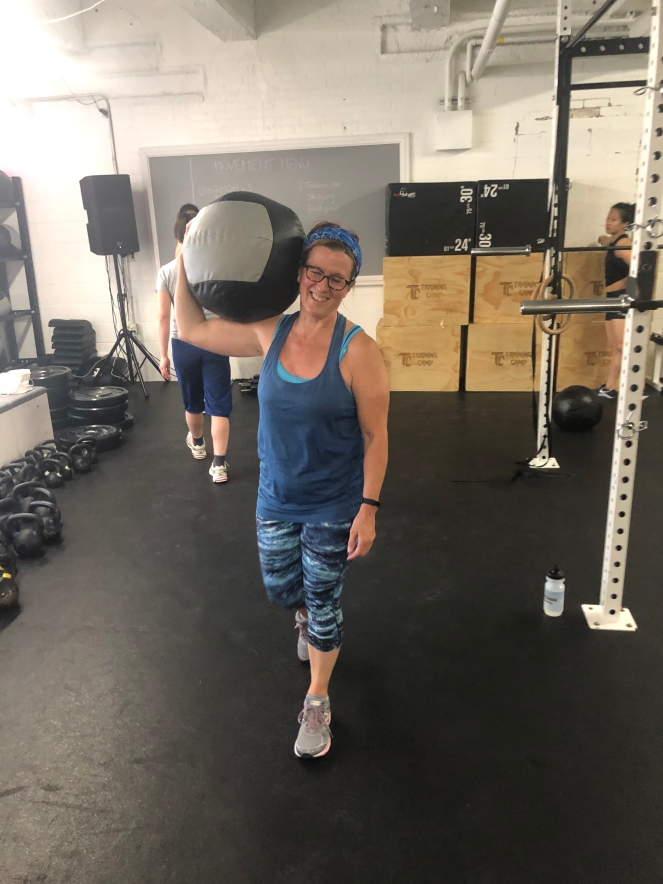 I’ve been raving — here and elsewhere — about how much I love the feminist cross-fit studio I’ve been going to for a few months now, Move.

In my previous post I wrote about how I love the mission of founder Kelly Taphouse and her team to focus on women’s strength and confidence, and how the team of coaches is focused on form, encouragement, safety, and figuring out your own goals.  There’s no talk of weight, or body shape, or “bikini bodies” or food.

It’s a safe, empowering, fun zone, and I’ve made it to 2 or 3 classes a week since February — which is unheard of for me.  (I’m still doing some spinning, running and yoga as well, but less intensely).

I never thought I would like working out in a group, and I never thought I’d want to learn the basics of Olympic weightlifting.  But here I am, 54 years old, (still menstruating regularly, btw, for those who were wondering, lol), still (sorta) running, still cycling and still spinning, still a yogi — and now, learning a whole new zone of movement.

The honeymoon phase of “whee this is fun!” is over a little bit, and now it’s just a Thing I Do. Last week, I made the commitment to buying six months worth of classes (a WHACK of cash) so I thought it would be a good time to reflect a little on why this seems to be sticking.

I became a runner 24 years ago, which was my first time ever thinking of myself as an athletic type person.  Over those two and a half decades, the intensity of my relationship with movement has ebbed and flowed (I wrote about the notion that we get a number of different “fitness lives” here), but they all have their own flavour.

I think crossfit at Move has poked me into a new fitness identity — a kind of unwavering commitment I’ve only ever had before when I’ve been training for something. 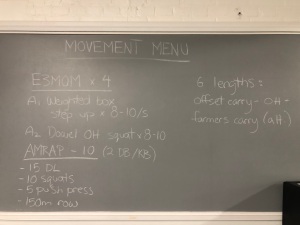 But even when I was a hardcore marathoner, I almost NEVER got up early to run.  And this week, I did this workout over there on the left on Wednesday at 7 am.  I don’t think I was the brightest light for the person I was working with, but I did it — with a little involuntary moaning when I was warming up.  (I am not really a morning person).

Thursday at noon, I found myself running down the street with a medball on my shoulder (see photo above — I’ll spare you the video), as well as trying really hard to really get the motion of “hanging cleans”, a lift that involves flipping arms and elbows upside down as you bring the weights up to your shoulder.

I do a lot of different things in my work.  I coach leaders, teach leadership, and design and lead large strategic change processes in healthcare and academic systems.  It’s very tough times in those worlds in Ontario right now, and my clients are under a lot of pressure.  Most have multiple jobs, huge demands and not enough resources — combined with a strong sense of mission.

My job is to help these folks find clarity, feel more grounded, feel energized to move forward — when they are feeling burnt out and undervalued.

I start out a lot of my days facing a group of people I’ve never met before who greet me and our processes with skepticism (and sometimes, honestly, lashing out).  I have to turn that skepticism around to help them find some sense of energy and — dare I say it, joy — about their work. Mostly I love my work and I’m pretty good at it, but it can be draining. Sometimes, it exhausts me.

Paradoxically, when I take that emotional exhaustion to Move, and push my body further, I get restored.  I feel stronger, less tangled, and supported by the community in the same way I have to support my clients.  I feel cared for — by myself and by the people and space around me.

Which brings me to #3 — learning something new in my body at 54 unleashes incredible optimism.  I’ve never been super great at translating verbal instruction into physical response.  That’s why I never took up team sports or anything that involved things you hit — I never knew what people meant when they told me to “choke up” on the bat or swing a golf club from the hips.  I seem to be able to do it with things I can figure out intuitively — yoga seems to follow that, with light touches from good teachers — but not so much with Things I Swing or Throw.  But the coaches at Move are such good teachers that I am slowly learning to translate instructions like “drop under the weight” into a little hop in my body.  I still have a hard time putting complicated sequences together — like the 7 steps of the “turkish kettlebell get up” — but I am discovering new, smaller muscles in my body — especially in my back and shoulders — that I’m recruiting into action for the first time in my life.

And that feels good to middle aged me.  My body still has new frontiers of strength to discover — it’s not all just new accommodations for my slower, thicker, hormonally different reality.  How magical is that?

My body is still middle-aged.  I’ve gained strength, but it’s muscle in the thicker, more sluggish body that seems to be mine now.  Since I started doing cross-fit, I’ actually a bit bigger, and some of my clothes fit *less* well.  (I seem to have abandoned jeans altogether). But — it’s a kind of bigger that is unleashing a sense of power.  I can stand on my hands and take my feet off the wall for 5 seconds.  I can lift 65 lbs above my head comfortably.   I can do 20 tuck jumps.  I am inching toward a full pullup. 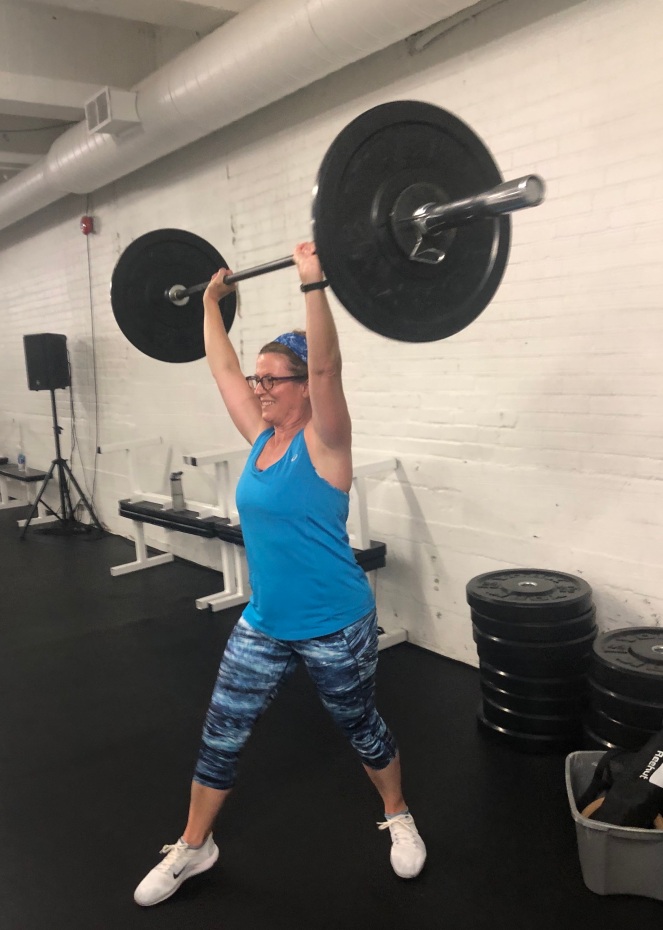 Feeling strong, finding new parts of my body and being part of a supportive, kind community?  Sign me up.

I wrote this post and scheduled it, then went to a class this morning. One of the exercises was banded planks, where you plank and your partner pulls on elastic bands to try to test you. After the class, someone I see all the time but haven’t spoken to before came up to me and said “you were so strong on your planks! It was so inspiring!” Then we got into a conversation about why she likes her 8 year old daughter to come for child-minding so she sees so many women of all shapes and sizes working hard to be strong.

That’s why I love this place.

Fieldpoppy is Cate Creede, who lives and lifts things in Toronto, and who writes here twice am month.