This throwback Thursday urges us to be cautious about fitness research headlines like “Couch Potatoes Rejoice!: Strenuous Exercise May Be Bad for Us.” Punchline: moderation is probably the way to go…. 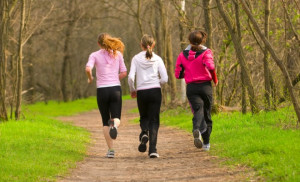 There’s a new study, called the Million Women Study, that says that strenuous exercise is bad for you if you do too much of it.  I’m never sure what to think of this kind of thing. And the reporting never sends quite the right message. The Wall Street Journal headline reads: “Couch Potatoes Rejoice: Strenuous Exercise May Be Unhealthy.”

Note that it says “may,” meaning it’s not necessarily unhealthy. So it might be a bit early for non-exercisers actually to rejoice.

According to this report:

A recent study in Circulation, a journal of the American Heart Association, found that exercising strenuously four to seven days a week conferred an increased risk of vascular disease, compared with two to three days a week of strenuous exercise. Accompanying the study, published in Circulation’s Feb. 24 edition, is an editorial entitled, “Physical Activity: Can There Be Too Much of a Good…