Last Saturday night, around a campfire, my friend and business partner presented me with a framed certificate of appreciation for the work I’ve been doing as volunteer director of Nikibasika, a youth development program in Uganda.  This campfire was the heart centre of our three day Triadventure, our annual fundraiser for the project.  I couldn’t stop crying.

The Triadventure is a kind of “choose your own adventure” athletic event — we take a bus up to a kids’ camp on Friday, where we run and/or swim (whatever distance we want, really), and play a charades-like game, then in the morning, call the kids in Uganda.  Then we paddle 11 kilometres on pretty big lakes, have lunch at a provincial park, then ride bikes 25 km to a small campground where we camp for the night.  The next morning, we ride our bikes 125 km back to Toronto.

I will be honest:  it’s a stressful event for me.  Along with doing some fairly considerable physical things, I feel the intense responsibility of the event going well, being meaningful and safe and fun for the community.  I feel incredible stress about raising the money.  With a tiny group of people, I made a personal commitment to a group of orphaned and vulnerable children 10 years ago whom I now know intimately, for whom I’m auntie and parent and friend and sponsor .  Every year, being able to raise the money feels precarious.  The project will end when the initial 52 kids are all grown and launched, but that’s still a few years away.

We have achieved amazing things in a decade — this teensy video shows some of the movement — and this one shows some of the “kids'” voices when we were there in May.  But over a decade, the core group of people has changed and evolved, relationships have come and go (I had a Triad-rooted romance and break-up), and the participants have gotten older and either have become less physically able or had kids or distractions — for a lot of reasons, less able to do the event.  It’s been hard to keep the momentum up, and this year was particularly hard. 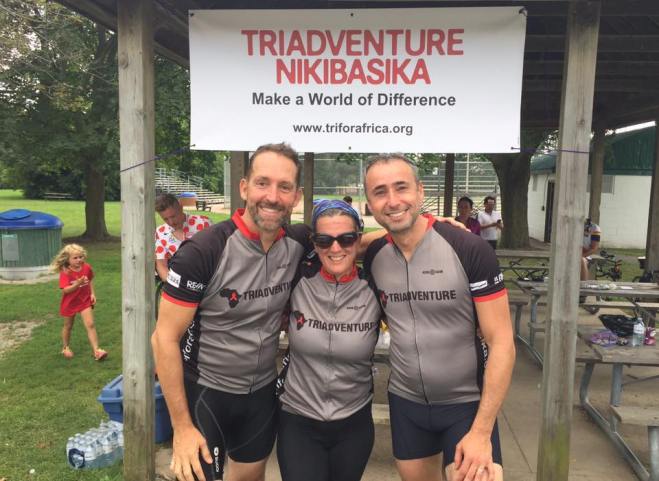 One of the long-time community members — David — came with us to Uganda for the first time in May.  He is an amazing, open, loving, positive and creative person. 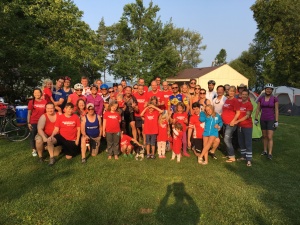 Over a beer after one of our days with the kids, we challenged him to recruit some new people to the Triadventure.  And he came through, with a team of seven people from a company he works with.

Along with David’s new people, we also invited people with kids to participate — either in the full athletic events or in a new one-night family event we created on Saturday.  It was amazing to have the kids there.

Saturday had messy weather — we had to stop the canoe segment early because of crazy big waves, and we had some logistical issues where we ended up waiting at a marina for too long for rides to the next lunch park, as a storm circled around us and the crew and families at the park where we were supposed to have lunch got soaked and blown.  In contrast, we were dry and bored.

Those of us in charge had a bit of a tussle over how to proceed — whether we moved crew and families out of the lunch park, where they were getting wet and windblown, and therefore skipped the afternoon 25 km cycle — or whether we pushed crew to wait for us so we could ride.  As the only leader riding that day, I got bossy — not my best self — and insisted on riding.  I wasn’t super graceful about it, but something in me knew we needed to ride.

We got to the lunch park eventually, crammed down lunch in the micro-climate storm, commiserated with my brother-in-law who was crewing and had broken his toe moving a picnic table, and got on our bikes.

It was a good ride.  No rain.  One family rode with their kids, including a 10 year old who had broken her wrist the week before.  One couple — who met on the Triadventure — handed off their baby so one of them could ride.  Everyone simmered down. We arrived at camp and had a peaceful evening, with the campfire and our conversation about what gives us meaning resetting us all.

As we were talking at the campfire, one of the young women David had recruited mentioned that she was particularly moved by the stories of the kids in Uganda because she had a similar story.  I noted it and didn’t say anything.

Sunday morning, the long ride.  I was still feeling icky from how I’d handled the decision-making the day before, and raw in the way this event always makes me feel.  It’s a lot to hold, our commitment to these kids, the need to make and be part of community.  I rode most of the first 28 km leg by myself, finding some grounding in the best part of the long ride, the trees and country roads and lake and Sunday morning calm.  Ontario is very green this summer.

I volunteered to sweep the second leg, and Joh offered to sweep with me.  It’s the hilliest leg, and people struggle. It was sunny but windy.  Very quickly, I realized that the young woman who’d made the comment at the campfire the night before about having a hard story was fighting her way through this ride.

Joh was wind-breaking for another young woman, and I found myself riding alone with this woman I’ll call Elle.  We started talking and I asked her about her story.  She said she was happy to share, and told me about losing both her parents and her best friend before the age of 25. Her parents were immigrants and she has no other family here. She laughed a bit and said “I’ve really only just started to deal with my grief, so I cry all the time.”

She was riding a hybrid and wearing running shoes.  It was a hard road, and she was fierce. I kept promising her she’d get through and she climbed every hill, incredulous and protesting.  “YOU PROMISED THERE WERE NO MORE HILLS!”   She’d never ridden more than 60 km before. We made it to lunch and I hugged her.

Someone else swept the third leg, and Elle was last.  She came in in tears.  We made it clear that it was okay for her and two other people who were finding it hard to stop.  No one wanted to stop.

Joh and I set out for the last leg and Elle was right behind us.  “You guys can go ahead,” she said.  I knew the city leg could do your head in, and Joh and I, without conferring, both said “no, we’re with you.”  If you can trudge on a bike, Elle was trudging.  We encouraged and just rode, not too slowly, but always making sure she was with us.

She laughed out loud.  “No fucking way!  I have never done that.”  If determination was a colour, it was bright purple, and it surrounded her.  She sped up.  “I can’t believe I’m keeping up with you!”

We passed three of our riders, and laughing and protesting, made it to our marshalling point at the Dairy Queen.  With my mouth full of chocolate dip, I asked David to lead the group to the finish line, and asked Elle to be right behind him.

We only had 18 athletes this year, and we raised just over $140,000 of our $145,000 budget. That’s magic.  And what happened to Elle as she rode that course was the same kind of magic. This event, this project, can’t be explained with logic — its truth is in the determination to do something that surpasses what you already know to be true, with what happens when you connect with elemental humanity, when you push yourself from the inside.

Fieldpoppy is Cate Creede, who lives, works and rides in Toronto.  Nikibasika is still short of its goal for this year, so if you can possibly make a tax-deductible-in-Canada donation, it will go to a fantastic cause.  Everyone in Canada is a volunteer and all the money goes straight to the project. Click here: https://www.canadahelps.org/en/pages/nikibasika-and-triadventure-2017/

2 thoughts on “Riding from the inside out”

Relaxing!
We're riding!
The Herd of Thundering Turtles is a really great group ride on Zwift
Who am I anyway?
Curling Together: Interview with Dale Curtis and Joanne Tarvit