Since I’ve been in Sydney on sabbatical, I’ve had the chance to go to a few of the incredibly beautiful rock tidal pools here that are built on the ocean in a protected area for swimming. One of the most famous, Wylie’s Baths caters to serious swimmers, people with kids, and anyone who wants to enjoy sun, surf and sea in a pool where the waves wash over you. Here is a picture from my visit there. 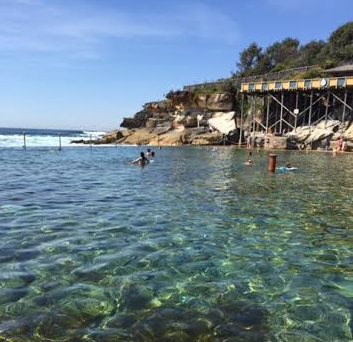 Right next to Wyle’s baths, in Coogee beach in Sydney, is another pool—McIver’s Baths. What makes McIver’s Baths special is that it is a women-only space (young male children are allowed, as well as female children of any age).

McIver’s is also special in that it has been a women-only bathing space for well over 100 years. It is reputed to have been a historical location where Aboriginal women bathed, and was formally constructed with changing rooms in 1886. The McIver family took over running it until it was taken over by the Randwick Ladies Amateur Swimming Club, which has held the lease on the place ever since.

There have been objections to the exclusion of males from the pool throughout the history of McIver’s. Most recently, in 1995, a man complained to the New South Wales Anti-Discrimination Board that he was barred from the baths on account of his sex. The city council responded that there had been no complaints of this nature, and the lessee stated that they couldn’t afford to build changing rooms for men. (It is also true that Wylie’s baths, which admits everyone, is 450 meters away).

A blogger writing about the history of McIver’s added this about the case:

The women’s pool was traditionally used by older women, women with disabilities, nuns and others who preferred privacy as well as pregnant women and older people with arthritis who enjoyed the pool’s private sunbaking area and didn’t want to go to the beach, indulge in mixed bathing, or be bothered by men. Thursday was traditionally married ladies day. Girls’ schools held water safety classes at the baths, which were popular amongst the Islamic community. The club’s free lessons had helped Islamic women and children gain confidence in the water and some Islamic women contended that it was the only place their faith permitted them to swim. The medical profession argued that Coogee’s women’s baths were the only place where women who had suffered disfiguring operations could comfortably bathe.

As I was going in on Saturday I saw some Muslim women in hijabs and tunics, with their full-length swimsuits underneath. They were leaving the bath, carrying inflatable pool toys with their kids in tow. As I changed I saw women of all ages, sizes, and nationalities hanging out on the rocks (some sunbathing topless, some reading), swimming, wading at the edge, and chatting with other women. A bunch of the women were swimming topless, some in their underwear—as if they had decided impulsively to stop by for a swim, but hadn’t brought a bathing suit with them. No suit? No problem! Others (like me), were in bathing suits, long-sleeve rash guard shirts, with goggles and cap, doing laps.

Now, I’ve spent a lot of time in women-only activities—I play on a women’s squash team, I’ve road and mountain bike raced in women’s fields and I’ve taken a zillion dance classes that were almost entirely women. And I’ve enjoyed the feeling of camaraderie you get in a women’s locker room. Tracy has blogged eloquently about that experience here .

But I really really like this space. I like the friendly vibe, the feelings of safety and relaxation that other women told me they felt here, and the freedom to swim or read or sunbathe unfettered by suits or judgment. In particular, I saw several larger women swimming, hanging out, smiling, and walking around with none of the self-consciousness that I’ve witnessed (in myself and others) countless times at public pools, gyms, and beaches. This is not to say that women are uniformly non-judgmental, but rather than this place—a place for women-only—seems to dictate a congeniality and solidarity in attitude which I wish existed at every swimming pool on the planet. Tracy has blogged here about women-only races and offered some responses to those who think they are unjustly exclusionary.

If readers have qualms about dedicated women-only spaces, let me know—I’d like to hear them. I’ve not offered any arguments here, just said that my experiences and observations were overwhelmingly positive.  But if you’re ever in Sydney you should go. Among other reasons, the entrance fee is only 20 cents!