This past week was a big week in my life. So big that I couldn’t fit it all in and had to cancel cycling holiday plans. No Manitoulin Island for me this year.

While my father’s illness, badly behaved teenagers (it’s the end of the high school year, we’re all running out of patience) and travel plans on the part of my sister-in-law who usually does back up parenting for us were part of the story of competing commitments, it wasn’t all bad.

Here’s some of the good stuff: My son graduated from the Triangle Program. It’s Canada’s only publicly funded secondary school classroom for LGBTIQ2S youth from grades 9 to 12. That’s exciting. I was thrilled to be there for his graduation ceremony and to get to spend time in Toronto for Pride. Mallory and I also got to do the Pride and Remembrance Run. Guest bloggers Alice and Susan and Stephanie were there for the run too.

Susan wrote about the Pride Run last year: “There is one race, however, that motivates me best, the Pride and Remembrance Run, held each year in Toronto on the last Saturday of Pride Week. It was founded in 1996, The Pride and Remembrance Run has become an annual tradition promoting and fostering community spirit, goodwill, volunteerism and sportsmanship in the LGBT community.” For the complete list of reasons she loves it, read on here.

Stephanie says about this year’s event, “This was my fourth year doing the Pride and Remembrance Run. I love it for so many reasons: it’s close to home, the course is familiar (I run around Queen’s Park all the time), and it starts at a very reasonable 10am. It’s also one of the most fun races to run: confetti at the start, the Pride festival on the surrounding streets, people dressed in costumes and bright colours. It’s become a bit of a traditional race for members of my department. This year, I think we had about 14 people running – what a great turnout!” 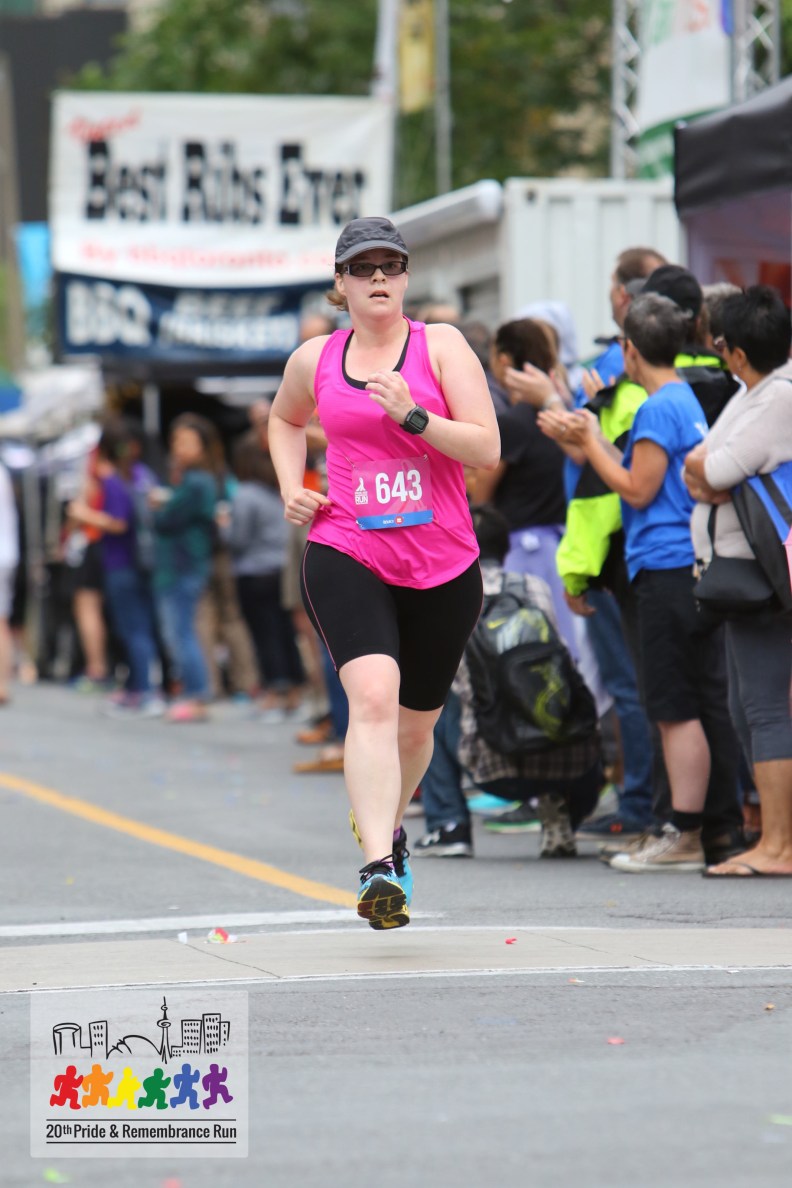 I think between us this community of bloggers had the full range of speeds and experiences! Susan got a personal best for 5 km and Stephanie broke 25 min for the first time in awhile. Alice and Amy had a terrific fundraising year. They arrived late, 14 min after the start due to “toddler issues” and pulled up the rear.

Mallory and I were in the middle. Mallory wanted to do the 3 km walk and I was originally going to run. But after walking 16 km the day before I had a sore knee and started to worry about running in the upcoming duathlon. In the end I walked all but the final kilometer and started to run only when Susan came past us.

I loved the event. It was probably the best organized run/walk event I’ve ever taken part in. The serious runners got to start first and they were coming back in as the walkers were leaving. The best times were in the 16 and 17 minute range. Speedy!

Here’s how they organized the waves:

I loved the glitter/confetti cannon.

I loved the closed roads in downtown Toronto.

I loved the marching band playing Sesame Street and Muppets tunes. I loved all the costumes, of course. These guys won for best costume:

But most of all I loved the sense of community and the full range of ages, abilities, and ambitions. I’ll definitely be back, next year I hope without a sore knee, and I hope to run the 5 km. See you there!

Oh, and I also love that the Premier of Ontario, Kathleen Wynne, does the run with police escorts on bike!

2 thoughts on “Walking and Running with Pride!”