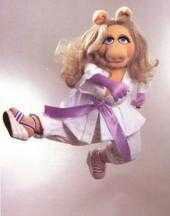 In Listen to the Pig Skepchick writes: “As far as I am concerned, Ms. Piggy is one of the strongest female characters in popular culture in the past 50-odd years. Piggy proves, time and again, that she is a strong, confident woman who can go toe-to-toe.. or snout-to-snout with anyone else. But I might be wrong. Let’s analyze a little, shall we?”

She goes on to give reasons why Miss Piggy is a feminist icon. And of course, her martial arts prowess is one of the reasons.

I agree. I’m a big fan of Miss Piggy.

Tough, feminine, and a fighter. I like that combo.

And so when a call for papers on Jim Henson and philosophy hit my mailbox this week, my thoughts turned to the pig. I mentioned the themes that interested me and a friend suggested a title. It’s “Miss Piggy’s Feminism: Redefining Human Relationships Through Martial Arts.”

Now I just need to write the abstract!

Oh, a quick Google search told me that Miss Piggy is still using her martial arts skills. Here’s an excerpt from an interview with Miss Piggy and Kermit.

“Miss Piggy, we get to see you use your martial arts skills in the film but only briefly, are you still a black belt and how often do you practice your fighting moves?

Piggy: Yes I did all my own stunts in the movie. I trained at and continue to be seen frequently at Master Chang’s Karate Dojo and Chinese restaurant.”

The food reference is of course a comment on Miss Piggy’s size. One of things that’s interesting about Piggy is that she’s portrayed as being both fat and fit and she’s a strong woman. Sure she’s teased about her weight and portrayed as eating too much, but there are never any doubts raised about her strength. How rare is that in television and movie culture?

Edited by Timothy M. Dale and Joseph J. FoyAbstracts are being solicited for a new book, Jim Henson and Philosophy (under contract with Rowman and Littlefield).Most known for his work in children’s programming, Jim Henson’s puppets are among the most recognizable cultural icons in the world. From his creation of Kermit the Frog, Miss Piggy, and other characters from the Muppets, to the enduring legacy of Sesame Street and the Children’s Television Workshop, Henson’s creations have had an immeasurable effect on the growth, development, and substance of educational television and children’s entertainment in the 20th and 21st centuries. Within his stories and characters Henson communicates a complex set of philosophical messages, including explorations of identity, love, death, friendship, and knowledge. Henson’s legacy endures in part because he did not shy away from exploring philosophical questions, and never underestimated the ability of children (and adults) to grapple with profound cultural and philosophical questions. In addition to the Muppets and Sesame Street, Henson developed additional worlds that produced equally profound stories, including the television show Fraggle Rock and the films Dark Crystal, Labyrinth, and MirrorMask.This book will explore the many philosophical aspects of Henson’s work, and examine his characters, stories, and productions for their contributions to perennial discussions about metaphysics, ontology, epistemology, ethics, and social philosophy. Chapters are solicited that investigate philosophical themes written in an approachable style for a general audience of lovers of philosophy and Jim Henson. This book will follow in line with the successful collection Dr. Seuss and Philosophy: Oh, the Thinks You can Think! (Rowman and Littlefield).