My first race on the water!

Okay, technically my second. We had a London Rowing Club in house mini regatta at the end of summer so that some of the rec rowers who wanted to try racing could give it a go.

But that night the weather was bad and the lake was decidedly uncooperative. We had white caps right up to the dock and so while we did go out and race, we only did one 500 m race and in our double we focused on staying upright. So I’m not counting that.

Saturday was the opposite. Brilliant sun, clear skies, calm water and beautiful fall colours. 5000 + metres, not 500.

The Head of the Welland was held on Saturday at the Welland International Flatwater Centre.

Welland International Flatwater Centre is a significant water-based recreational area that combines international-standard competitive water sport facilities with recreational and social opportunities.Set in 411 acres of parkland and 272 acres of water, WIFC is the premiere calm water surface in the heart of the Niagara peninsula.In 1972, a new shipping channel for the Welland Canal was diverted east of the City and the remaining waterway, the Welland Recreational Waterway, was born. Known affectionately as the “Old Canal,” this beautifully landscaped water park area runs through the heart of the City of Welland.

It was a terrific day. The four of us, our quad, drove down together. I liked that. It gave me a chance to chat with more experienced rowers about racing and I didn’t have to worry about getting there in time, getting lost, parking, or any of those pesky details. Thanks Wendy!

An aside: I fear this is part of an inevitable trend, long rambling race reports written on the weekend.  See here and here. Professors usually spend a serious chunk of time on the weekend reading, writing, preparing for class. When you race on the weekend, that gets squeezed out and I’m afraid it’s tightly composed blog posts that are taking the hit. Given that I raced Saturday and I’m spending all of Sunday working at the Ontario University Fair and this post is being written on the train ride there, the time crunch is worse than usual. I’ll continue with more random race observations but you’ve been warned.

First, when you’re doing a 5.3 km head race and you have to row out to the start to race back that’s a lot of rowing. The way it works is that people row down one side of the canal to get to the start and race back on the other. It’s an awful lot of rowing for people doing multiple events. The two experienced rowers in our quad went back out and did a second race in a double. Phew.

From Wikipedia: “A head race is a time-trial competition in the sport of rowing, also known as crew to a few USA organizations. Head races are typically held in the fall and spring seasons. These events draw many athletes as well as observers. In this form of racing, rowers race against the clock where the crew or rower completing the course in the shortest time in their age, ability and boat-class category is deemed the winner.Common categories of age may be high school and college-aged rowers as well as adults. Those over the age of 27 are typically referred to as “masters”.”

On the way out to the start, I thought the 5 km seemed long but coming back it flew by. On the way out I looked at the birds, the other rowers, and the gorgeous colours. On the way back, I stared intently at the back of Jen’s hat and counted bridges.

Second, when your club’s trailer is the furthest away from the docks and you’re carrying a quad on your shoulders that’s a lot of work too. Thank you CrossFit for making this part of the event doable. One of the other master’s quads had male partners carry the boat but I’m glad we can do it on our own.

In theory I approve of age based handicapping systems. I like age group medals. In practice I’m motivated by the boats around me and I like knowing that passing is really passing, for example. If we’re ahead of another boat I’d like to know if we’re really ahead, etc. You have to guess a bit anyway as the boats are sent off singly and you’re a bit ahead of some boats, and a bit behind others, from the start. The experienced people in our quad could keep track of that. Not me. More to learn…

Fourth, I liked the atmosphere at the event. Each club had an open tent for shade where you could leave your stuff and sit and watch rowers in other events come by.  Some clubs, notably the visiting Americans, had a pretty flash set up. There was music, as at most races, but because people were taking part in different events there was a good crowd around for most of the day. Lots of people and boats coming and going. The coloured oars and unisuits made sense now as it allowed me to tell the different clubs apart. There was a great mix of ages, young teens through to the masters rowers, and I liked that a lot. I also didn’t mind wearing my unisuit when I was surrounded by people wearing unisuits! ( See No Way Am I Wearing That! for my thoughts on body conscious athletic wear.) A pet peeve about all sorts of races, no vegetarian food. Only the Gran Fondo came through on that front. Along with my own wrenches, I’ll bring more food next time.

Fifth, I should have brought a bike! There’s a path that runs alongside the canal and you canride up and down the 5 km route and watch the boats go by.

Sixth, diner dinner after was terrific. Nice to have a chance to socialize with the other women in my quad. And the pie was amazing. Thank you all!

Oh, and seventh, I’ll definitely do it again. 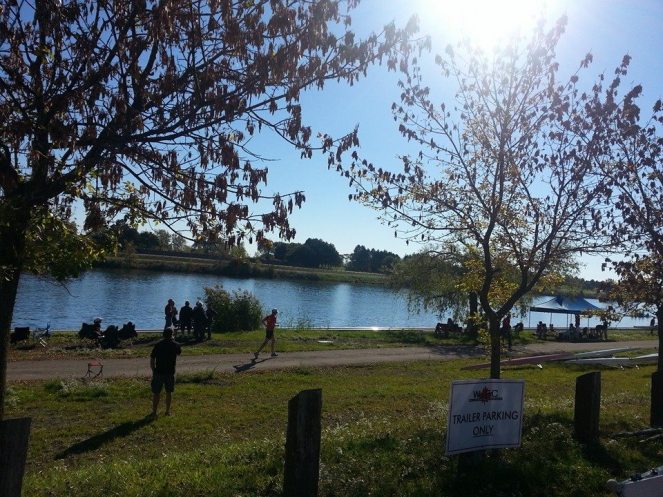 8 x hills at Riverdale park for @torqride ride bank challenge
Gearing up for my virtual 10k next week — my conversion from the half marathon I intended to run this month. @towomens_runs
#runforahmaud
Full crow on a Friday morning thanks Alex! @abh_movement
Great #sweatysaturday workout again @abh_movement
Funny stones