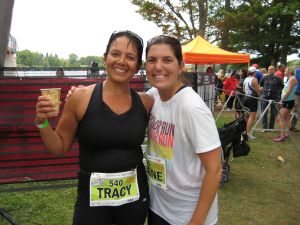 Samantha posted yesterday about riding, not racing, Gran Fondo on the weekend. Today I’m going to post about doing, not racing, the Lakeside “Give-It-a-Tri” Triathlon.  It’s the try-a-tri that I did on Sunday. This too will be a ramble, since like Samantha, I don’t have time to write a nice concise post today!

Unlike for the Kincardine Women’s Triathlon in July, this time I was only excited, not nervous, leading up to race day.  I felt pretty good about my swimming–I’ve been a strong swimmer since I was a kid.  I just got a new bike and was eager to try it out. And while running is definitely still my weakest event, I do more than the requisite 2.5K every time I go out. So I went into the day feeling relaxed and eager.

I did it with my niece, Jolene, and had support from my friend, Dawn. So it was a fun Sunday morning outing. Pleasant surprise:  I knew at least four of the volunteers and that helped me settle in and feel at home.

We arrived during the final stages of the Olympic distance that had started earlier that morning.  We were a bit behind schedule so the first mistake was starting the day with a sense of rush.  By the time we got there, it was already 11. Race time was noon.  Pre-race meeting on the beach at 11:30. And we still had to get our bearings.

In Ottawa earlier this summer at least one bike went missing, so at this event they had new security measures for the transition area and racking the bikes. You had to get a wristband and a bike band before you could enter the area to rack your bike.  Post-race, you couldn’t leave until they checked to make sure your wristband number and bike band number matched.

Racking the bike and setting up for the transition are events in themselves.  I had a good spot near the fence, so I could easily grab something out of my bag if I forgot to lay it out. But I wanted to make my transitions as smooth as possible.  We racked our bikes and went on to pick up our bibs and race kits, bathing caps, get the body marking, and use the loo one last time before donning the wetsuit.

There’s definitely a buzz in the air as you prep for a triathlon.  Lakeside is a pretty small little resort, kind of like a conservation area, with a tiny lake, soft sandy beach, and grassy shore beyond the beach.

The event was sold out so there were 155 people at the pre-race meeting on the beach where they explained the entire course and outlined some basic rules about drafting and blocking on the bike (neither allowed).  I put on my wetsuit during the meeting (using the tip I’d learned from the race website earlier that day: put plastic grocery bags on your feet to make it easier to pull on.  Excellent advice. Worked well).

Most people wore wetsuits, but truth to be told the water was actually warm enough to swim without. We only had 400 metres to do.  Most would be out of the water within 15 minutes.

After the meeting we picked up our timing chips. I missed the part about not entering the transition after that (because crossing the mat would start the chip). So did Jolene and a few other unfortunate folks. Because I did do that (for no good reason really), I missed my warm-up swim as I had to wait around for the chip issue to get solved.  That was mistake number two. I will definitely in the future take time to do a few practice strokes before the race.

The race started in three waves. Men under forty. Women under forty.  And men and women over forty.  Jolene was in the second and I in the third wave, so, standing in the water together before the swim, we hugged and wished each other luck. She was freaking out over the swim (but ended up with a respectable time).

I’m really glad that the swim is first because it’s the thing I’m least nervous about and in a triathlon you really can’t spend a lot of time thinking about anything other than the event you’re on at the time.

The Swim:  Next thing I know, they’re counting down from ten to the start of my swim.  At GO! everyone started running through the very shallow water at the beginning towards the first big green buoy that marked our first turn.  The water was warm, but it was really murky. You could hardly see anything, which made it challenging to see the people in front or whether you were about to get kicked.

I struggled more than I anticipated with the swim. I couldn’t find my rhythm or catch my breath even though I am normally very rhythmic in the water and have no difficulty breathing. I even had to do breast stroke for a bit and a couple of times flipped over onto my back.  This unexpected struggle started a negative tape in my mind — “this is your strongest event and you’re tanking!” — and for a couple of minutes I felt like “what the hell am I doing?”

But I eventually talked myself down from that ledge and hit my stride. It wasn’t nearly as hectic swimming around other people as I thought it would be from all the video I’d seen.  Though the water was murky, I could see and touch a few weeds (ew!). That bolstered me on to get out of there as quickly as possible.  The turn points were large green floating cones, and there were enormous orange markers along the way. So the one thing I was uncertain about — keeping track of where I was going — wasn’t as bad as I thought it would be. Mind you, I did end up zig zagging a bit more than I do when I’m following that nice straight line on the bottom of the swimming pool at the Y. 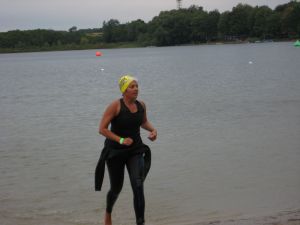 [though this pic makes it look like I’m the last one out, it’s the camera angle. There were people behind me — lots!]

Transition One (Swim to Bike): I ran up onto the beach and across the grass, thankful that it was easy on the bare feet.  I had the wetsuit off to the waist before I got to the transition area, and then peeled the rest off as quickly as possible. I threw my bike shorts over my wet clothes and put on my helmet, socks and shoes. I now know why some do not wear socks: It’s hard to get them on when your feet are a bit damp and you’re in a hurry. Quick tie laces (elastic laces) are a must).  I grabbed my bike and ran out to the mount line.

The Ride: The 10K ride took a hilly route over country roads, out and back.  I’d just picked up my new bike the day before and was still playing with gears.  I didn’t get it quite right every time but I passed a few people, a few people passed me, I hit over 30K an hour at one point on a downhill, and in general felt like a little kid with a new bike.  It was during the bike part that I had the explicit realization that I was doing not racing the triathlon.  I was all happy and smiling. The occasional person who passed me apologized. That confused me. Then it hit me: they’re racing and assume that I must be too!

Transition Two (Bike to Run):  I met Jolene in the transition area and she was ready to run together. But running is her strong suit so I begged off and let her go. I almost left without taking off my bike shorts. Doubling back to do that took up extra time. I kind of took an easy jog out of the transition area.

The Run:  I was not in the mood to run. Even though it was only 2.5K, my legs didn’t want to work and my mind kept telling me to walk.  So I did a walk-run for 2.5K.  Mistake number three was eating nothing after breakfast. It was now nearly 1 p.m., I’d swum and biked and still had a bit of running to do and I felt hungry and light-headed.  I am very grateful for (a) the people along the side of the road cheering us on to the bitter end (I placed 133/155, so, you know, there weren’t that many people left behind me!) and (b) that our race bibs had our names on them. There is something lovely about having people encourage you by name. That energized me over the final K.

So yes, I finished 133/155 overall, 8/10 in my age category.  Even though I wasn’t trying to win or even beat out any particular competition, I felt a little bit disappointed in my result. It took me 1 hour and 4 minutes, and I KNOW I could have broken an hour if I’d had a practice swim, managed my transitions better, refueled either before or during the race, and pushed harder on the run.

If I’m going to do an Olympic or even sprint distance triathlon I have a TON of work to do, especially in the running department but actually in all three events and in practicing good transitions.

It was loads of fun. Dawn got some great pictures. And Jolene survived the swim and ended up with a better overall time than I did. She says she won’t do another one, preferring instead to focus on her running.

Me? I’m sticking with it. I’m determined to do at least three next summer–one more beginner triathlon where I push a little harder, one sprint distance, and either second sprint distance or (and this is my real “fittest by fifty” goal), the Olympic distance triathlon at Lakeside next summer.  And I want to get more into the race mindset.