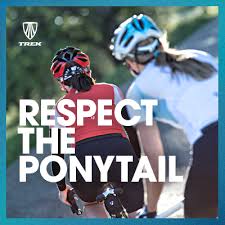 I don’t know very much about this Trek ad except it keeps appearing in my Facebook newsfeed and some of my women cycling friends aren’t fond of it. On the one hand, it is an image  of women on bikes rather than men on bikes and women on podiums. (See Is it time to kiss the podium girls goodbye?) But on the other, it’s not a particularly diverse image of female fitness. The women are not racers. They aren’t wearing team kit. And not all women who ride bikes have ponytails. (Though at times I’ve been tempted to stick on a fake one! See Women cyclists, implicit bias, and helmet pigtails.)

I’m not particularly bothered or offended by the ad. It’s better than lots of the stuff one sees in the media about women cyclists.

What do you think? I’d like a more diverse range of images of women on bikes, some racing, others not. I’d also like respect on the road, whether or not I’ve got a ponytail. I’m curious to know what you think about this Trek ad campaign.

13 thoughts on “Respect the ponytail? How about just respect girls and women?”