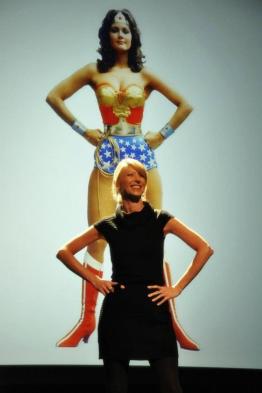 One of the ways that women’s sports challenge traditional gender norms is by encouraging, indeed requiring, women to take up space and look powerful.

If you read my post Do ladylike values clash with the norms of sports performance? you’ll know that feminist theorists have written about the restrictions on the movements of the bodies of women and girls and on the pressure for girls and women not to take up space. And as Tracy has noted there are many different ways that fitness is a feminist issue but this is certainly one of them.

Those habits, being small and not moving confidently, can hurt women in a variety of contexts. As a counter measure, Tracy and I have both been impressed with the idea of power poses, postures that make one more confident.

Here’s the basic idea from a Huffington Post piece on how two minutes of power posing can have tremendous effects:

“Harvard social psychologist Amy Cuddy has documented how positive and negative body language shapes your self-perception and your hormone levels.In Cuddy’s experiment, done in collaboration with Dana Carney at Berkeley, one group spent two minutes doing low-power poses — head down, shoulders sunk, eyes averted, looking small. The other group did high-power poses – hands on hips, chest lifted, staring boldly out at the horizon a la Wonder Woman.Then they took a saliva sample. The high-power posers showed a nearly 20 percent increase in testosterone (the dominance hormone) and a 25 percent decrease in cortisol (the stress hormone). The low-power posers saw a 10 percent decline in testosterone and a 17 percent increase in cortisol.Cuddy says, “These two-minute changes (in body stance) lead to hormonal changes that can configure your brain to be either assertive, confident and comfortable, or really stress reactive and feeling shut down.”

Now Mark, of Mark’s Daily Apple, says power poses are the one thing he loves about yoga.

“Although the study only tested four particular poses, the overall expansive/constrictive principle is key. Those who practice yoga have likely observed these sensations. (Warrior pose and goddess pose – two “expansive” positions – have their commanding names for a reason.) Manipulating our physical posture, embodied cognition suggests, can have a dramatic psychological impact.”

And we both strongly recommend watching Ann Cuddy’s TED talk for the full effect. She’s amazing and she sold me on the idea.

15 thoughts on “Power poses, feminism, and taking up space”