Last month, I wrote about why I ride, the social justice edition. I focused on the ways in which riding brings me closer to the earth, to other humans, and to our shared entanglements on the road (and elsewhere). The bike, I argued, is a way for us to stay grounded in our commonalities, to recognize our different needs together, and to become more aware of the needs of our shared home, the earth.

For me, part of that last item has to do with changing the way I commute to work. My campus office is about 125km from my front door, and in order to manage that distance I used to drive to and from twice a week. (I’m fortunate to be able to work about 60% of the time at home.) I quickly discovered that driving was more arduous than I’d imagined (focusing on the road for 1.5 hours, at 120kph, is stressful: who knew?). So about a year ago I decided to start riding the train.

That worked fine, until the weather made it less than pleasant to walk the 5 or so kilometres from the station to my office along the riverside path. (One terrible winter day I discovered that the path was covered in about 4 feet of snow, uncleared, but having descended into the valley I had no choice but to do the portage. That was my workout for the day!) I began using the bus to get to and from the station/my office, but when I wanted to add in a visit to Paul, my and Tracy’s personal trainer, or my elderly parents in the west end of town, things got tricky. I discovered the buses don’t sync up well, and outer-ring-to-outer-ring locales aren’t served by direct routes very often, if at all. Cabs were an option, but seemed pricey as a regular choice.

So this past summer I decided that the best way to ensure I could continue commuting by train, and indeed commute much more by train (last winter it was about 40% train, 60% car, mostly because sometimes the ease of the latter got the better of me), was to buy a folding bike. One August morning I found a sale on my preferred model at Cate’s local bike shop, so I got the commuter service into the city and made the leap. 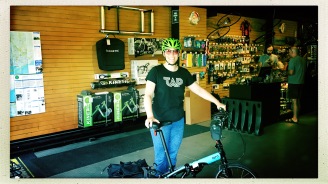 (Images of a folding bicycle, open, blue and black in colour; in one, Kim stands proudly in the shop with her green helmet on, holding the handlebars. In another, the bike is on a train platform with a green and white GO train in the background. I want to pause here to recognize my privilege in affording this new piece of gear, which came in at around $1000CDN. I saved for it using my monthly commuter budget.)

Now, folding bikes aren’t cheap. Sam has the amazing Brompton, the Cadillac (or maybe the Lexus? The Mercedes?) of folding bikes. Her job is full to the brim of travel, and her knee issues mean a very easy to fold and unfold, quite light and very versatile bike are required for her to do her job effectively. For me, the Tern was the budget option: it suits my needs well because it has a rolling adapter that I purchased as part of the sale, and I can pull it from my car to the train and back like luggage. (This is also great for airports, I’ll add.) It’s on balance larger and heavier than the Brompton, but the trade-off is that it has exceptionally solid, almost regular-size bike features, and I notice literally no difference between it and my upright Dutch commuter bike. (In fact, I think the Tern is faster and more stable on hills.)

(The above is a video showing three characters from the BBC satire, W1A, “arriving in tandem” at work on their Bromptons. It’s a spoof on the poshness of the bikes, their status symbol value. The narrator voice is David Tennant. The deep voice is Hugh Skinner, who plays an intern who has somehow got himself a Brompton anyway; the higher voice is Jason Watkins as Simon, humble-bragging about his new carbon-fibre Brompton. If you don’t know the series check it out!)

I’ve now been commuting with Titania for a month. How’s it gone? Fairly well overall, though there has been a learning curve. Here are my top three take-away lessons thus far.

I am a university professor currently based in Hamilton, Ontario. I teach theatre and performance studies at Western University; previously, I was Senior Lecturer in Drama at Queen Mary, University of London. On Wordpress, my teaching blog is The Activist Classroom; I'm also a regular contributor to the popular blog, Fit is a Feminist Issue. View all posts by Kim Solga

4 thoughts on “Adventures on a folding bike!”