My youngest son—who we refer to as Son 2 when we talk about him on the internet–is 10 years old, and bikes crazy. Along with my husband, who cycles on an amateur team and loves long roadbike rides, he often goes out for 12 or even 20 mile rides. I don’t often go with them because I have a hybrid. However, in the summers when I take the kids up to the Traverse City area in the northern peninsula of lower Michigan (AKA the Mitten), Son 2 only gets long rides if I am game. Two years ago, we noticed a long stretch of lovely trail up near Petoskey and Charlevoix along Lake Michigan and vowed to ride it. Last year, we rented hybrid bikes for a few hours and followed through; I blogged about it here.

This year, Son 2 and I decided to try a new-to-us trail on the Leelenau peninsula. Only completed 6 years ago, the dedicated Leelenau Trail rail-to-trail system is 17 miles from just north of Traverse City up to Suttons Bay, criss-crossing major roads at stop-signed intersections. At the three trailheads with dedicated trail parking lots, bike servicing stations provide manual pumps and bike tool sets as well as water fountains and trail maps. Along the way, the trail is well-maintained with the occasional rest stop and port-a-potty provided by the TART trail system.

Perhaps most importantly when cycling with kids, there is a bike-and-ride system incorporated into the trail. Whether you ride the trail one way from TC to Suttons Bay, or Suttons Bay to TC, you can catch the bus back. Don’t want to ride roundtrip, for your own reasons or to save kids’ legs so it stays fun the whole way? Just catch the bus back.

We chose to start a little north of Traverse City at the easily-accessed Cherry Bend Road trailhead, which was quite close to the corresponding return bus stop on Cherry Bend Road. Our plan was to rent a hybrid for me, while Son 2 would use his own wee road bike which we were able to fit handily in the back of the van on the trip from Illinois to Michigan. We intended to ride the remaining 14 mile stretch of trail up to Suttons Bay, have a nice lunch, walk past some shops downtown, and pick up the bus at the Suttons Bay library on the way back. And this is exactly what happened.

The Cherry Bend Road trailhead had ample parking. From there, we could have gone south into Traverse City, or north up to Suttons Bay, which we did. The trail is even, with only some elevation. Since both TC and Suttons Bay are on the west arm of the Grand Traverse Bay, both directions have the same amount of up and down; there is no easier direction in this respect. The Leelenau peninsula is covered in agriculture, from cherry orchards to grapevines to grains. The stretches of the trail which pass through these fields are only occasionally shaded, but flat and speedy riding. 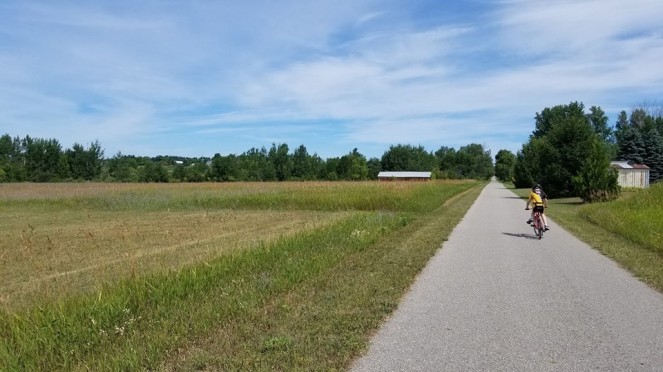 Benches are placed far more frequently than needed. Son 2 says “the benches were placed about halfway between where people needed it and where they didn’t need it, and they were also strategically placed at beautiful spots.” He speaks truth. Occasionally we would go by one and he would say “I want to stop here, too, but we just stopped!” (we rested twice for water and the view).

Our first stop was on a bit of a hill with woods behind and fields below, the bench in the shade and our water bottles still cool. 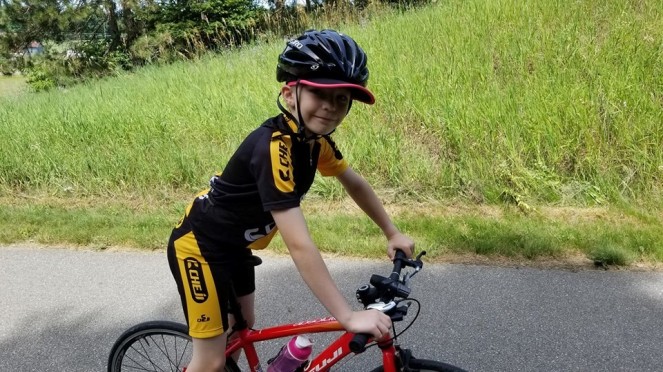 Before we took off, we agreed a mom-and-kid selfie was in order. As we came back out into the fields, we stopped again really quickly to take in the view, which included fields of grass shaded green and light purple. 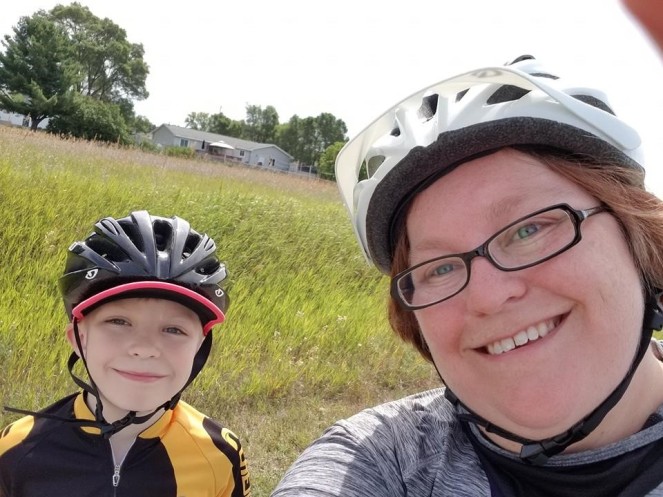 Carrying on, we passed signs for turns to vineyards, shops, and more. One family had placed a handmade hand-varnished picnic table under a tree on their property with a few snacks in a box labeled “take one”, and the word “welcome” carved into the end of the table. Another resident had built an elaborate garden along their entire stretch of the trail, with American flags and pennants of many colors strung along and across the trail. There was a sculpture of frog in a straw hat riding a bike, and a windcatcher sculpture turning in the wind that blew refreshingly across the trail.

At one point, we saw a building with one full wall intact, the others crumbled, made of concrete with smooth river stones set into its exterior walls. We stopped here for another break, accidentally gifting a small pink water bottle to whomever next stumbled upon the shaded picnic table nearby. 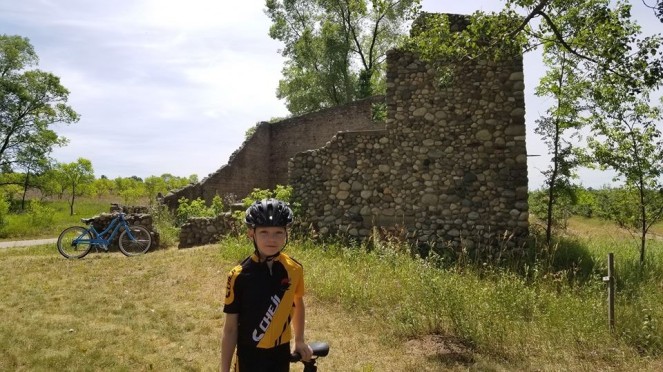 When we got to Suttons Bay, the trail carried on a bit, and we turned off towards downtown, walking our bikes until we came to a rack and then locking them. We walked around a bit, hit some of Suttons Bay’s many pokestops for our ongoing family game of Pokemon Go, and grabbed a special treat of steak at a decent restaurant we picked out by using Yelp. A short bikeride later, we arrived at the Suttons Bay Library right next to a lovely park with a good playground near the marina. The bus stop was clearly marked right out in front and a shelter was provided. I realized belatedly that I didn’t have exact change for the bus, and popped into a redolent tea shop where the proprietress kindly broke my $20 bill for me, and I dropped $1 each in her donation bowls for the local LGBTQ support center and the local Women’s Center.

The bus pulled up right on time, and we put our bikes on the front. When the bus pulled up to the next stop, just south of Suttons Bay, a family of three children and one adult joined us, putting most of their bikes on the interior rack. The converted school bus has the capacity for eleven bikes, as indicated in this picture Son 2 took from his aisle seat. 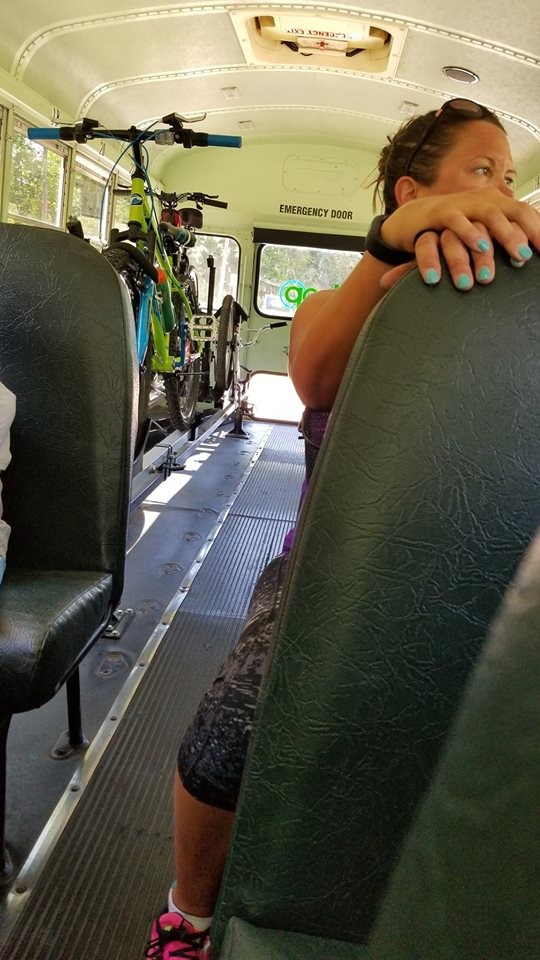 The bus dropped us back at the Cherry Bend stop, we unloaded our bikes, and rode half a mile to the trailhead where we found our vehicle unmolested and put our bikes in the back as happy cyclists rode past on the trail behind us.

The trail had many people, but did not feel crowded. There were enough folks that we could ride for a bit with someone and strike up a conversation, or meet someone at a rest stop, and loads of people commented on Son 2’s speed with his wee road bike. I want to emphasize that I am not a cyclist. I am not steeped in cycling culture. I am not regularly on a bike, though I do walk a lot and occasionally run and do a startling number of pushups for someone my size. I found this ride, even on a rented hybrid whose saddle was an insult to my buttocks, entirely doable. Son 2 said afterwards that he could probably have done the 28 mile round trip, but was glad he didn’t have to.

I heartily recommend either the trip we took last year, or this one. Both can be pushed out to be a very long pleasant ride through beautiful terrain for seasoned cyclists, or easily shortened and, in this case, combined with the bike-and-ride bus, for those with less training or who are habituated to shorter more leisurely rides. Because of this, both are suitable for individuals and families with kids, of a variety of age ranges and fitness ranges. Folks who enjoy shopping and/or cute downtowns will get a big kick out of Suttons Bay where the downtown theater still operates a single screen for residents and visitors.

I will close by noting that more than once, Son 2 was complimented on his kit, and it was clear to everyone that the youngest of us was the most experienced. This had the merits of being both flattering to me as a parent, and true. Also true: this was a wholly pleasant experience with not a single downside except the loss of a single water bottle, pink, which I hope someone else found and now loves.

With the right link to the podcast this time! Thanks for pointing out the mistake in the old post
Bike ride!
Bike ride!
Be strong but don't look strong! A blog post on strong women and representation.
Smiling!
Good morning from Lizzy!