Back in December I wrote a post about being naked in public, three ways: in new “universal” change rooms in pools in my city of Hamilton, Ontario; in the same kinds of spaces (with WAY more cubicles and tight corners) in London, England; and in a public spa and thermal bath complex in Konstanz, Germany (few cubicles; lots of comfy nudity).

My questions in that post revolved around etiquette, protocol, expectation, and the cultural labour these spaces appear to be doing towards supporting inclusive, body-positive community (whether or not they are actually doing that labour).

Today, for the first time in a while, I returned to one of the facilities here in Hamilton that have converted to M/F/U change spaces; I was overbooked and had to skip my usual Friday swim (which happens at an older facility not yet renovated to include a gender-neutral room).

To my surprise, when I swanned toward the universal change room entryway, I found this: 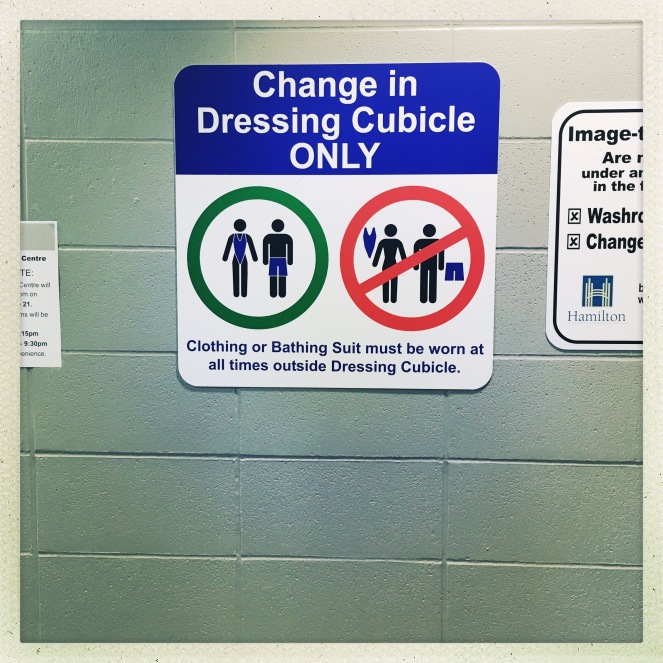 (A sign, posted on a green cinder-block wall, that reads: “Change in dressing cubicle only; clothing or bathing suit myst be worn at all times outside dressing cubicle.” The images on the sign include a green circle around a woman’s body clad in a one-piece swim suit and a man’s body clad in swim shorts; and a red circle with a strike-through against the images of the same bodies, with one-piece and shorts off to the side. Note: I snapped this photo from the change-room threshold, which is barrier-free and opens onto the lobby. I made sure no bodies were nearby in order to respect the “no photography in change rooms” rule.)

NO NUDITY! DO NOT EXIT THE CUBICLES NUDE! THIS IS A GENDER NEUTRAL SPACE! 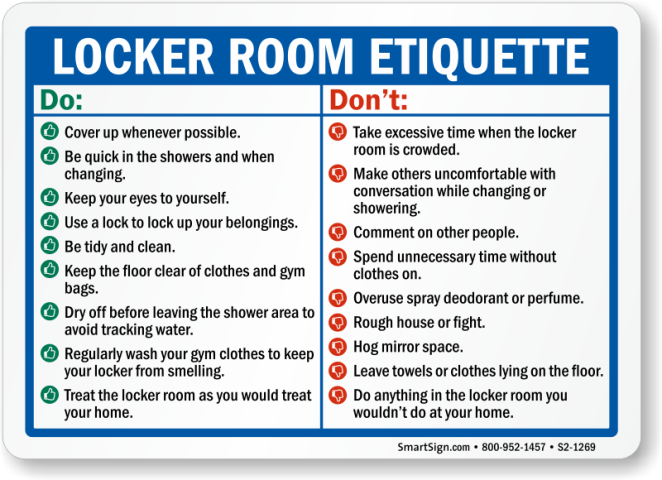 I googled “gender-neutral change room etiquette” and this list of do’s and don’ts turned up. It is haranguing: be neat, tidy, and for god’s sake cover up your freaking horrific human of a body; don’t be lazy, slow, or glowery. Get the fuck out ASAP. Sounds familiar.)

I’m trained as a literature scholar and a scholar of theatre and performance; that means I read cultural texts for their nuances, for a living, and try to make sense of what they aim to accomplish amongst actual, human lives.

My pool’s universal change-room sign said the following to me.

The bright blue that backgrounds “Change in dressing cubicle ONLY” sets that text off in sharp relief. All-caps for ONLY is scolding typography, as though to say: DO NOT DARE LEAVE YOUR CUBICLE NAKED! It is fairly patronizing and deeply shaming.

The images are workmanlike and designed to be read across languages and cultural contexts (more or less; only North American Christianity could, if you ask me, dream up such a blatantly unsexy way to render human nudity). The communication is meant to cross language barriers because there are lots of immigrants in our community (I witnessed one Chinese-language speaker interacting with a lifeguard this afternoon, for example), and the sign is obviously in part, if not primarily, targeted at them.

So tick the xenophobia box too, please.

The sign makes no mention of the showers – my personal favourite part of locker-room-sanctioned nudity – but we can guess the implied protocol.

What to make of this?

Well, on a purely pragmatic level, I’ll tell you what I made of it in the split second it took me to decide what to do with my body upon encountering this sign.

I realized I could be my nude and joyous post-swimming self only in the women’s change room, so I went there.

And here’s the rub, the sad bit, the loss: I had to choose between body-positive feelings, and the gender-neutral change room.

Some neutrality; some body positivity! 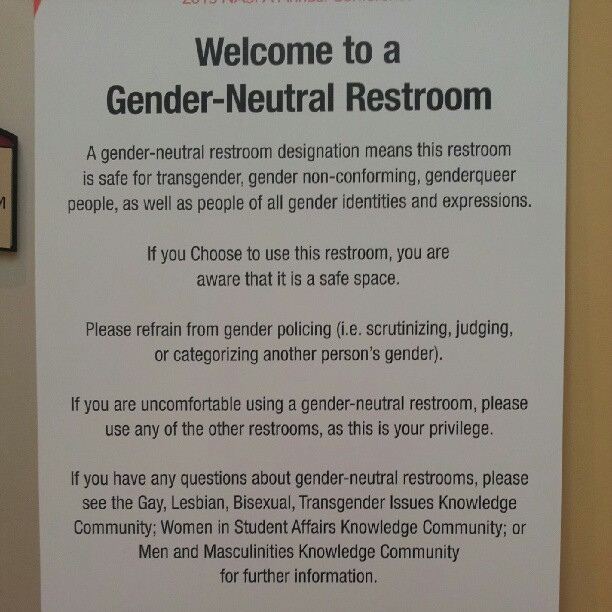 (Another image that popped up in my google search. It reads, in a plain, sans-serif font: “A gender-neutral restroom designation means this restroom is safe for transgender, gender non-conforming, genderqueer people, as well as people of all gender identities and expressions. If you choose to use this restroom, you are aware that it is a safe space. Please refrain from gender policing… If you are uncomfortable using a gender-neutral restroom, please use any of the other restrooms, as this is your privilege.” NOW THIS SIGN I CAN SUPER GET BEHIND.)

I thought a lot about the change-room sign incident after I left the pool. I thought, too, about the several FFI community members who fed back about my original post and noted they would not be super comfortable nude in mixed spaces.

I realized that my biggest problem with the sign wasn’t the message it was (sort of, maybe, clumsily?) trying to communicate.

The problem was with language, and its intention.

This is, totally, a worthy goal.

But the language also, therefore, assumes predation, assumes a lack of tact and generosity on the part of body-positive users; it assumes that all bodies in the space share a sense of nudity-as-shame, nudity-as-aggression. Which isn’t true.

So in the car on the way to my next gig, I started thinking about how I might phrase some similar caution in a more welcoming, dare I say body-positive-positive, way.

I came up with this:

This change room is a gender-neutral, body-positive space that welcomes people of all identifications.

Please use the space in a way that respects the privacy and comfort level of others around you.

(I’m not sure about imagery. I’d love suggestions!)

The language I’m proposing states what I hope are the deep intentions behind the creation of the space: it’s for everyone, care-fully. I think that’s the idea behind gender-neutral spaces in Hamilton-area pools; I’m not sure, though. (My sense from the sign I encountered today is that they might be souped-up “family” change rooms. Sigh.)

It also places the responsibility for fair use on a community of users, acting together in everyone’s best interests. (This is called democracy, btw. At least to me.)

Are you alone in the space? Go nuts! You do you! Get naked, sing ABBA. Rock on.

Is someone in the space with you who seems more modest, shy? Perhaps calibrate your ostentation to remember that they also share this space, and that your ostentation might be taking up more than its fair share of that space, for them.

Is someone in the space with you who might be nervous about your presence? That’s ok – they are here because they have trust and faith. Be you, but not aggressively. Instead, assert your good will toward that person.

Is someone in the space with you who might think you are unnerved by them? That’s ok – it’s part of the process of becoming a community. Be you, welcomingly.

This is just one shot – my shot – at a better way to say what needs to be made clear in gender-neutral spaces: some protocol for what to do once you’re inside, but not in a way that assumes a normative sense of embodiment, nor that assumes body-as-shame.

Do you have examples of, or suggestions for, gender-neutral change-room etiquette? I’d love to hear!

I am a university professor currently based in Hamilton, Ontario. I teach theatre and performance studies at Western University; previously, I was Senior Lecturer in Drama at Queen Mary, University of London. On Wordpress, my teaching blog is The Activist Classroom; I'm also a regular contributor to the popular blog, Fit is a Feminist Issue. View all posts by Kim Solga

3 thoughts on “Being Naked in Public, pt 2: languages of instruction”