When Pokemon GO first launched in Canada in yesterday, servers crashed. Just as predictably within hours my social media newsfeeds were full of people complaining about it all. From the “turn in your man card” memes to the “keep out of my yard” signs. Ugh. People!

People are playing computer games outside. They’ve left the stereotypical basement. A friend’s kid wanted to go to an art museum because he heard it was a pokegym. (What’s a Pokemon Go gym and how do they work? See here.) Another friend talked about leaving her house and walking 25 km at a time when she was suffering from depression and not much could move her.

I’ve got adult friends playing and neighborhood kids too. Even my teens say it’s pretty cool. My only worry from a parenting angle is the need for data on smart phones. Up until now the gang has been happy with wifi but that limits where you can find and get Pokemon.

My own Pokemon associations go back to the cards when my kids were little. I’m not much of a computer gamer except when the kids would introduce me to them. Mostly they liked the amusement factor of watching me stumble around in virtual worlds. I enjoyed seeing what they were up to. I’ve played World of Warcraft, Minecraft, Portal, and Skyrim. But each only for a short time. I’m not much on battling and slaying but I liked the puzzle solving of Portal and the world building of Minecraft. Skyrim I loved for the aesthetics and the story but I never did very much as a character. These days it’s pretty much just word games for me.  But I like the idea of games that take people out into the world. 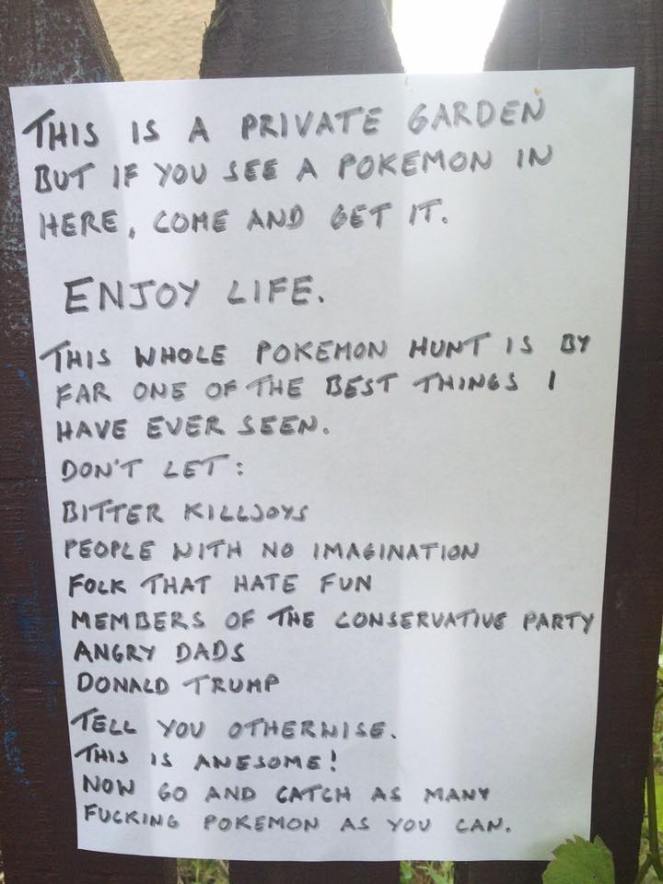 Mink Slaughter, a Facebook friend, wrote, “I don’t get why people are being all judgmental about this game. There were around 150 people spending the evening at Harbourfront Friday night, chatting, socializing and catching Pokemon. I thought it was a lovely way to spend a summer evening and it felt like hanging around a Mexican Zocolo (town square).

People are outside playing, meeting each other, visiting cool spots they’ve never been to before and generally having fun. I’d say that’s a pretty awesome life choice.”

For a why people hate, see here.

3 thoughts on “In Praise of Pokemon GO”