A cyclist friend shared this the other day. Training camp in ten weeks! (What’s training camp all about? See this post, Where’s my neon green bus with snacks?, for details.) Of course, it’s even closer now.

If you needed inspiration to hop on the trainer, that’s it right there. Also along with every other cyclist with mountains in their future I’m hoping to drop a bit of weight and make it to the top of that dreaded, but oh so beautiful, mountain.

I thought of South Carolina as flat but that’s until I got to area around Greenville. Turns out there’s a difference between the lowlands and the uplands. Turns out also we were riding around the latter. Here’s what it looks like. This is a photo of Caesars Head. 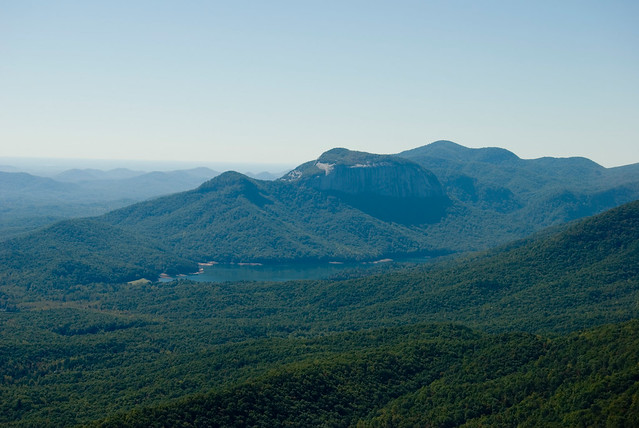 Competitive Cyclist magazine has this to say about Caesars Head.

“Ask most cyclists in Greenville, South Carolina, what their favorite local ride is, and the answer you usually get is the Bakery Ride to Saluda, for sticky buns at the Wildflour Bakery. But George Hincapie says, “The climb isn’t hard enough. Plus, those sticky buns are like a thousand calories.” His favorite: Caesars Head, which has what he calls “one of the hardest climbs in the area.” The ride crosses part of the Mountain Bridge State Natural Area near the North Carolina border, then heads back over Paris Mountain. You start casually, pedaling out of Greenville and through the tree-lined mall of Furman University. After 15 minutes, Hincapie says, you’ll hit the rolling hills, rivers and old farms of South Carolina’s Upcountry, then the 6-mile Caesars Head climb, which averages about 7 percent. Just before the summit, at 3,266 feet, there’s a chocolate shop on the left. Hincapie skips it. But everyone should stop at the crest to gawk at Table Rock and the Blue Ridge Mountains. In mid-September to November, watch for migrating birds flying through the valley below. On the way back to Greenville, Hincapie takes a detour for more intervals up Paris Mountain. While his heart rate often averages around 130 bpm for the entire ride, he says he can hit 185 on the climbs. “Both climbs are really good gauges of my fitness,” he says.”

Normally I like the descents but this one is a bit bumpy and technical for me. And after all the sweating on the way up, it’s also cold on the way down.  Less than ten weeks to go. And I’m counting them down. After that it’s all outdoor riding. Woo hoo!