As some readers of this blog might remember, I had been hoping for about a year to box competitively, but I thought it would never happen because I was too small (102 pounds) and too old (45) to find an opponent. I really thought it was a pipe dream, so it was easy to talk big about how much I wanted it. Also, my dream, such as it was, was to fight in some sort of local unsanctioned exhibition – nothing major, just a chance to actually fight competitively in front of people. After all, I didn’t start boxing until I was 43, well past most fighters’ retirement age.

So despite all my public bravado, I was utterly caught off guard when my trainer told me that he had found me a match, that I would be going to Brooklyn for a sanctioned amateur bout, and that I needed to hurry up and get registered as an actual amateur boxer with USA Boxing, get ready to make weight, and kick into high training gear. Once I fought, I’d have an actual official record. Seriously, this was not even on the radar for me as a thing that might happen. My opponent would be Debbie Strauss, a 98-pound fighter in her early fifties with four fights under her belt.

Oh, and for extra kicks: The bout was in nine days. NINE DAYS. And I’d be spending five of those nine days on a trip to Scotland for a conference I’d agreed to speak at months ago, and then taking an international flight with a five-hour time change just a couple of days before the fight. My body takes flying hard; these were not ideal conditions. I had been training pretty intensely already – my normal weekly routine includes five group boxing workouts plus one private coaching session and two to three sparring sessions. Still, I was nothing like ready to jump in the ring.

I immediately adjusted my plans as well as I could. I quit powerlifting immediately, to give my legs and shoulders time to get as fast and limber as possible. I found a serious boxing gym in Edinburgh and arranged to work with a trainer each day I was in town. I cancelled my flight back from New York to Washington and arranged to stay in the Brooklyn YMCA for the two days before the fight so that I could try to get over jet lag and use their gym without distractions. I bought myself a ton of high-nutrition, low-volume, high-quality ‘food’ – spirulina bars, organic elk jerky, nuts and dried fruit, that sort of thing – and packed it, settling in for nine days of very boring and micromanaged eating. If I weighed in over 105 I’d be disqualified. My walking weight had crept up to 107, and I bloat after long plane rides. I had a week to discipline the fuck out of my body. 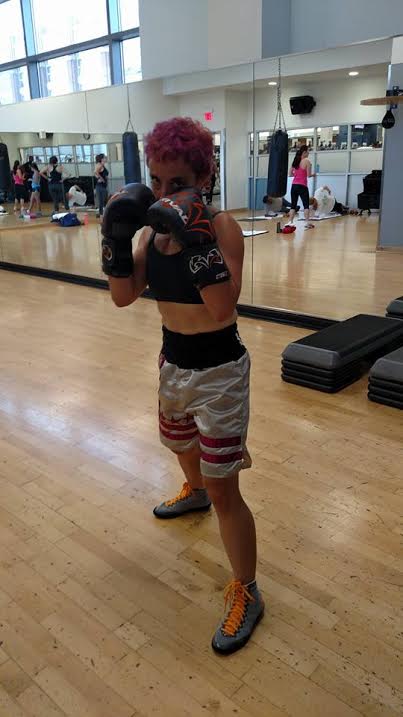 So that was how I found myself, still confused and rather scared by the entire turn of events, training in a dirty gym down by abandoned docks in Edinburgh, with a now-portly but still very intense former pro middleweight champion whose accent was utterly incomprehensible to me. He shouted directions at me that I couldn’t understand, but four days later he had revolutionized my left hook, which is now about ten times as powerful as it was two weeks ago. I worked with him for an hour and a half each day, guiltily sneaking out of the conference with my bag full of gloves and other gear and walking the 4.2 miles each way in order to cram in extra exercise, nibbling on spirulina bars. I skipped all the conference social activities to run 5k each night and sleep long hours. On the second and third days, the coach had me spar five rounds with an 86-pound little blond girl who was thirteen but still looked like she was ten, and was about to have her first sanctioned fight. As far as I could tell she more or less lived at the gym and trained in exchange for helping with its upkeep. She was terrifying and shockingly aggressive, and took pleasure in trying to get away with breaking rules. She told me she generally only liked to fight boys, and they all laughed at my desire to use headgear. She beat the crap out of me, and when I left she and her brother and the coach and his girlfriend all kissed and hugged me and wished me luck, or at least I think that’s what they said as I still couldn’t understand those accents at all, as hard as I tried.

The video above is of Mitts with the amazingly intense 86-pound little girl who beat me up in Scotland.

Then it was on to Brooklyn, where I checked myself into a spare and mothball-ridden but clean room at the Y. If anything was going to make me feel like a real boxer, staying there would do it. The other residents were mostly older, poor black men living there medium-term, or very fit, very adventurous-looking college-age kids passing through New York from around the world. I spent two and a half days doing nothing but trying to get over jet lag, working out lightly but for hours at a time, getting massages, keeping to myself, and for the last day and a half dehydrating myself, which is about my least favorite thing, especially during a muggy New York summer.

During this time I weighed myself probably five times a day, and measured out each calorie and nutrient. I almost surely did not need to do this. I ended up weighing in at 102, safely under the limit. But I am an ex-anorectic. I am also a huge foodie. I normally, and with determined conscious intent, ignore calories and micronutrients and just try to eat what is most yummy in non-excessive but enjoyable quantities. I do this because it is how I like to live, and because I know that my disordered, anorectic self lurks in me, ready to leap out if it’s given any opening. Getting ready to make weight is not a psychologically healthy affair for me. I become extremely obsessive. Concerns about my weight and (more pointedly perhaps) concerns about my ability to discipline my intake, to push through hunger and thirst, almost immediately co-opt my mind and metastasize. I obsess about weight and consumption to the point where it takes time away from obsessing about my athletic training. Luckily for me, if I go overboard on weight loss it compromises my competitive performance and that keeps me back from the brink, if only barely.

The day before the fight, I hopped on the subway and went over to Gleason’s – the legendary, world-champion-producing boxing gym where the fight would be – to check it out and get a feel for the place. The people there treated me like an honored guest and invited me to stay and use whatever I wanted. My trainer strictly disallowed me from any intense exercise that day, but I did some rounds of shadow boxing and hit the bags for a while, trying to register that I would actually be stepping into their blood-stained ring the next day – there to do my best, in front of a large crowd, to inflict damage on another person who would be doing the same to me. It didn’t seem even slightly real; surrounded by glistening bodies twice my size and half my age, I was riddled with the worst impostor syndrome of my life, though also tingling from head to toe with excitement. 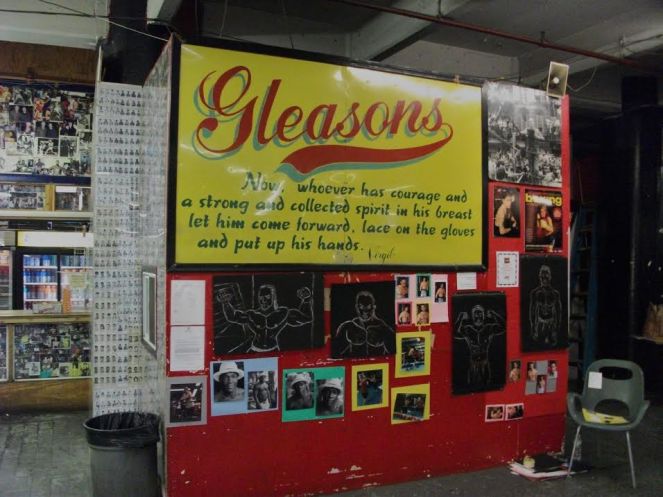 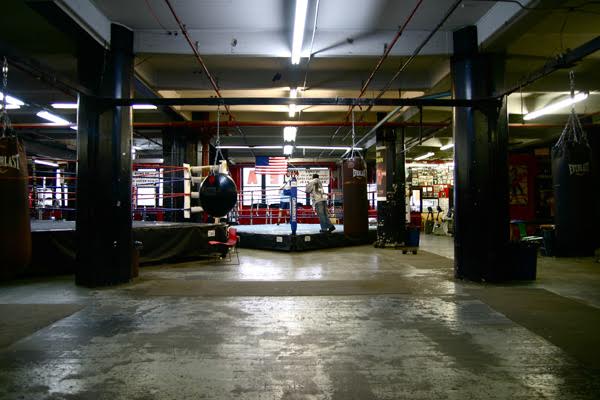 My body felt good – limber and light and fast and energetic. Frankly I looked great too; lightly dehydrated, my abs and other muscles were popping everywhere. I stayed for a couple of hours and walked back to the Y, under the Williamsburg bridge and past the warehouses and Jewish delis, with the sun setting behind the Manhattan skyline off to my left. I had nothing left to do but go back to my room and rest. I had been almost completely on my own for many days, but my partner, Dan, was taking the train up to meet me first thing the next morning, and by now I couldn’t wait to see him. The only thing I still needed was a huge hug and the kind of proud, enthusiastic reassurance that only he can offer me. 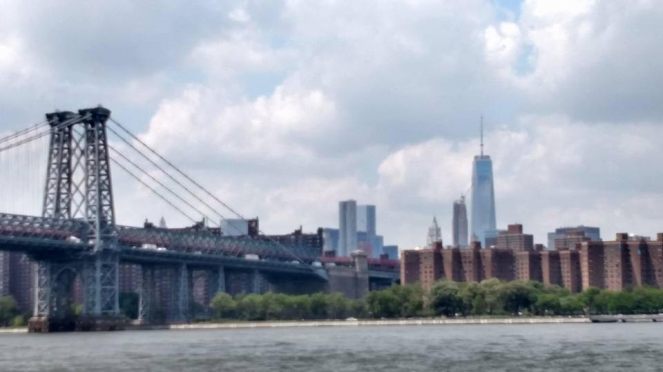 Next up: fight day and the big event. Go to Part II: the Fight.

8 thoughts on “Part 1: Getting ready for my first sanctioned boxing match! (Guest post)”