I’ve had four separate posts in our drafts folder, all about ninjas. Each was short and didn’t merit a full post really so I’ve decided to throw them together under the ninjas theme. Here we go.

1. Ninja music: My wake up music rotates through a few songs, mostly boppy and fun.  The list includes Ninja by 7 Seconds of Love, Inner Ninja by David Myles, and of course the Cee-Lo Green and Jack Black version of Kung Fu Fighting.  I’ve been thinking it would be fun to have an all ninja themed playlist for morning runs. Any suggestions? Wu-Tang Clan, Foo Fighters, any others?

2. Since I’ve been doing Aikido weapons training I’ve had some odd dreams. Recently I woke up after a nightmare in which me and a few graduate students battled off bad guys armed with swords. As if by miracle we were all armed with swords too and we successfully fought them off. The mood so far was like an action movie. Think Kill Bill meets women in philosophy. But then we realized we’d killed one of our attackers and that having ended someone’s life, our lives would never be the same.  It sorted of ended like the thesis of a philosophy paper and that was the nightmare bit. 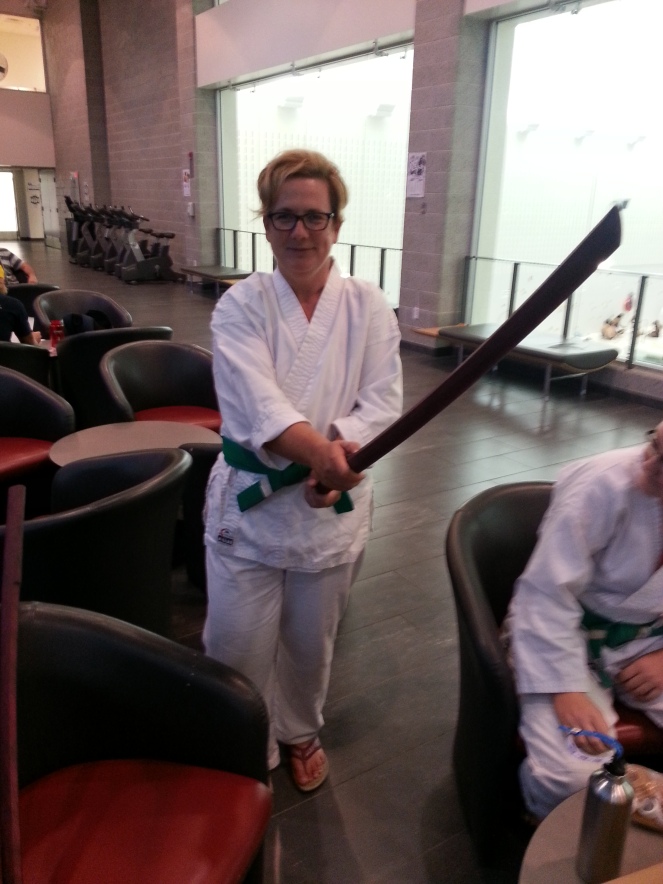 3. Ninja cyclists: No one in my house bikes like a ninja. We joke about ninja cyclists. Urban dictionary defines a ninja cyclist as “someone who operates a bicycle in dark or low light conditions with no lights or reflectors and usually wearing dark clothing.” These days it’s a very nervous joke though ever since a ninja cyclist pulled out in front of our van in the parking lot of the grocery store and ended up rolling off our hood. He was in the wrong even with lights but without them it was impossible to see him and stop. In a family of cyclists we were appalled even though he and his bike were both fine. I think it taught some people in the family an important lesson. We look like Christmas trees when we’re riding at night.

4. I’ve also been wanting to blog about sneaking out of the house early for workouts, like a ninja, of course:

Sam is riding in Florida #fitisafeministissue
My favourite coach @abh_movement demonstrating deadlift form for for me. She is awesome, as I wrote about in today’s blog post https://fitisafeministissue.com/2020/01/27/alex-profile-of-an-amazing-coach/
First 630 am xfit class ever. Gold star cate
I wrote a post about the many voices in our community who are doing the Yoga with Adriene 30 day journey @adrienelouise https://fitisafeministissue.com/2020/01/16/root-to-rise-voices-on-ywa-home/
It is so good to be running again after being sidelined for so long with an Achilles injury! #running #mexico #yay @tracyisaacs1
Back at 730 am #getstrong happy new year !