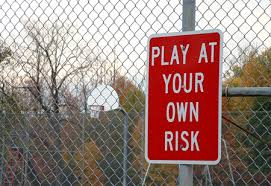 I’ve written about the risky behaviors of athletes before in Run a marathon, chug a keg?.

But it turns out our bad habits aren’t limited to drinking more than less physically active people. Athletes have riskier sex, are less likely to wear sunscreen despite spending more time in the sun, and are more likely to suffer from eating disorders.

Here’s more about the unhealthy habits of athletes according to Women’s Health:

“They Have Risky Sex
Compared with nonathletes, athletes are more likely to drink before or during sex (a dicey sex behavior).
Source: Journal of Studies on and Drugs

They Dabble in Eating Disorders
Twenty-four percent of women competing in endurance sports display dangerous eating behaviors such as bingeing and purging, versus 9 to 10 percent of women in the general population.
Source: Clinical Journal of Sport Medicine

They Get Burned
Despite being more vulnerable to skin cancer than the average person, 85 percent of college athletes reported not using sunscreen in the past week.
Source: Journal of the American Academy of Dermatology”

1.  I suggested that I thought that it might follow from will power and self restraint being a finite resource. Research tells us that will power is finite. Maybe there’s a maximum amount of concern for our health we can have and once we’ve used it up in one area, we’re less likely to care for our health in others. You eat carefully at lunch but then you might fail to follow through on your commitment to working out that night. Again, this is the opposite that I would have thought at one point. I liked Aristotle’s view that virtuous habits supported one another.

2. Another story is about balancing risk. Rather than running out of will power we might rationally think we have credit in the bank of healthy living that we can use some up.  Eat some kale, smoke a cigarette. That sort of thing. Sometimes people who are careful in one area of life are less careful in another.

Some people have thought along these lines about research that shows that muti-vitamin users lead shorter lives. From the Huffington Post (not always a reliable source on health issues but mostly citing Reuters here):

“A longitudinal study of women who took multivitamins and those who did not found that taking a regular multivitamin was actually associated with a shorter overall life expectancy. Critics of the study suggested that a bias may exist — namely, that people who take a multivitamin may be doing so in response to overall health problems that reduce their life spans. Although, according to Lichtenstein, the profile of the average multivitamin user is this: a middle-aged woman who eats healthfully and exercises and has an above-average education level. “The population who takes them is most often the population who is least likely to need them,” she says.”

So it seems not likely that sick people are taking multi-vitamins. Researchers are also skeptical that vitamins cause, directly, people to die sooner. Instead, some researchers worry that having taken the vitamin people then feel free to eat less well later in the day. They’re insured against needing to eat sufficient green vegetables. On this view, it’s eating less well, not taking the multi-vitamin itself that causes the problem.

3. Finally, the self-conception of athletes may get athletes into trouble. Many think of themselves as fearless and invincible. These traits encourage the sort of risk taking that serves athletes well on the sports field but not so well in life outside the match.

3 thoughts on “Why are the very fit more likely to have unsafe sex?”