I ride horses once a week for the sheer pleasure of it. It is a lesson but that’s because it is the easiest way to get on a horse and I might as well learn something while I am doing it. What is odd about my lessons and my horsing as compared to most of the other people I encounter at the barn (the tween and teen crowd) is I don’t take these lessons for any purpose. I don’t show and I’m not in any hurry to do that. I am utterly not feeling competitive about this sport. I love the animal and the activity.

However, it’s still a lesson and my new-this-year coach is excellent. She occasionally switches me to a horse that is more “challenging”. In the last few months, I’ve asked her to stop doing that. There is a horse I ride who I am really in tune with. She goes well for me and I can get her to behave in ways most other riders can’t. She doesn’t jump high because of her construction. But she likes to have fun and she is game for any number of skills improving exercises in the lesson. The more interesting the lesson is, the better she goes. It’s really great.

The shift that happened for me was my acceptance that I don’t need to “progress” for progression sake. I don’t need to jump higher. I don’t need a more forward (fast) horse. I don’t even need to learn to do flying lead changes (a hop and a skip in the middle of a canter/lope) if it’s going to freak her out. We just need to have fun and stay moving.

I’m a pretty confident rider with a solid skill set at this level. I am game for occasionally schooling (teaching) a horse to pay attention to a rider and stop shenanigans so that younger riders can benefit from that. But I have no desire any more to be the rider that conquers the wild horse or risks all sorts of injury while riding an animal that is too much for me.

I’m so chill with my new-ish settled attitude and honestly, it just makes riding more fun.

Go go ahead, do the fun thing and don’t worry about improving. It’s okay! 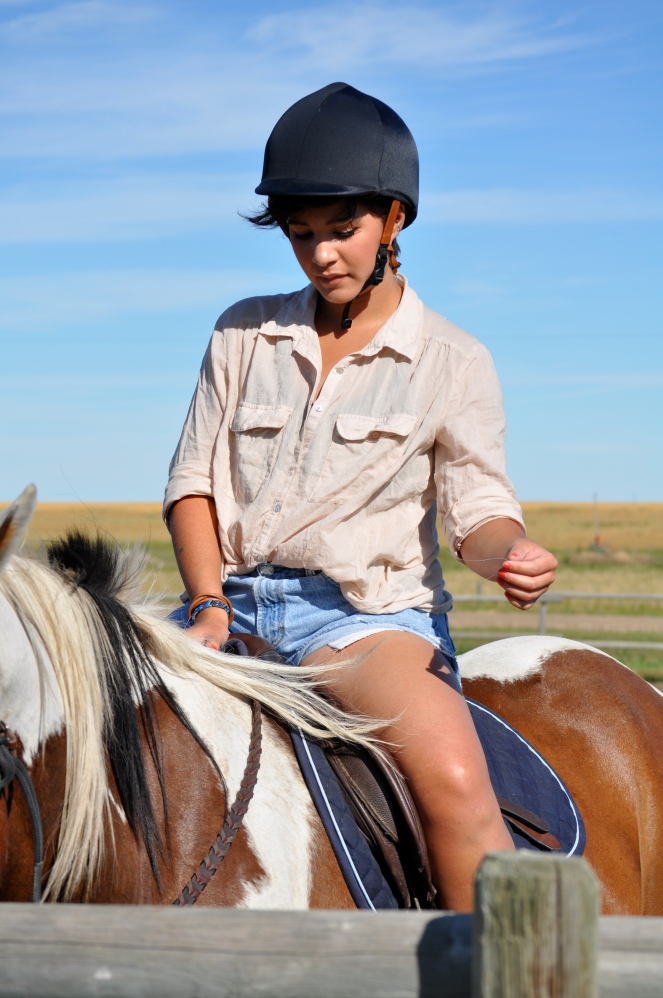 Breaking from a trot to a gallop.

Growing up in the prairies, I rode for most of my life. I was terribly allergic to horses– (probably the dust and hay in the stables, actually.) But I was one of those girls who freaking loved horses. So, cowboy boots on and tissues up my nose to stop allergy-induced nosebleeds, I insisted on riding.

The horse’s name was Miss Terrific and she was a sweet and temperate horse, as her name would suggest. She was probably a quarter horse, which is a very common breed. But in my mind, she was an Arabian (a beautiful and mystical breed—think The Black Stallion—they carry their heads very high and have distinctively angular faces).

The Taylors were a kind and hospitable older couple who owned the property (and horses) where I rode. I had started riding with them when I was about eight or nine. My sister was a bit too young to ride (and not that interested in horses as much as she was into the sheep on the property and the three-storey tree house). So while I rode, she spent her time as Queen of the Sheep.

I was in the sandy arena with the others in the class, a mix of kids my age and adults who would bring their own horses to the lessons (which were about $10 an hour, if you can believe that!). Dan Taylor was our instructor, an older man who was pure, distilled Alberta with a bit of a drawl and a dirty white cowboy hat he always wore. His wife, Dawn, rode in the arena with us with her beautiful grey-and-white spotted horse and would demonstrate for us what we were supposed to be doing. She and her horse always seemed so impossibly in sync with one another; as if her horse could read her mind. Dawn would barely gesture and the grey-and-white would respond immediately, seamlessly. 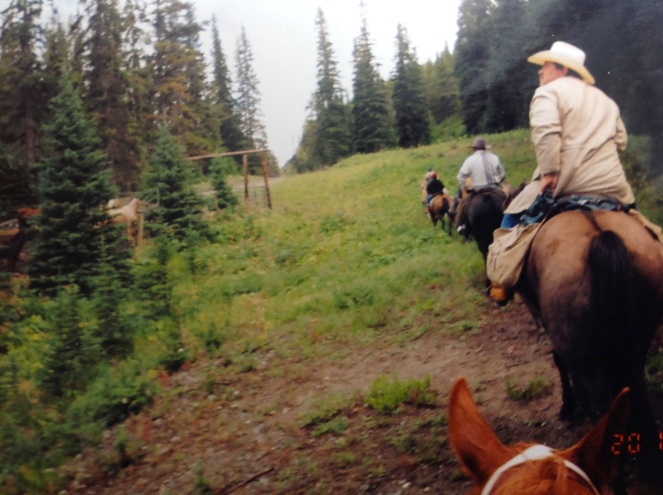 At this point I probably hadn’t been riding that long. It might have even been my first or second lesson. We would start by all riding around the arena at a walking pace, building up to a trot, learning to post (which is stranding up in rhythm with the horse’s movements to avoid being bounced in the saddle), then galloping. I hadn’t galloped yet. I’m not sure if it was the speed that intimidated me or if I just couldn’t get Miss Terrific to go that fast.

So there Miss Terrific and I were, four-beating it around the arena while others passed us, when another young rider came up alongside us.

“You’ve got to cluck to her,” he said, and clicked his tongue. (Some people give kisses—make a kissing noise to encourage the horse—or make clicking or clucking sounds, using audible cues rather than physical taps or nudges.) I could hear Dan over the speaker also encouraging Miss Terrific (come on, Miss Terrific, come on), and clicking into his microphone.

Alright, I thought. We can do this. I urged her with clucks and clicks and kisses and then suddenly—

We broke into a gallop. It felt smooth and perfect and somehow way better than the slower (and safer) trot I had been stubbornly hanging on to.

“Now you’re flying!” the other rider shouted to me as I took off past him. It was exhilarating. We had done it, Miss Terrific and I.

Over the years, I had the privilege to work with lots of different horses, both in Western and English styles. The Taylors always insisted that riding many different horses made one a better rider. And Miss Terrific was really their “beginner’s horse.” Eventually I graduated from her and learned to work with other horses; some who were feisty or faster or challenging in other ways. Some who were never property trained, some who tried to fight me, and some who just loved to eat and roll around in the mud. In later years, I learned how to barrel race and how to jump a course.

Even after nearly twenty years, I still find it the slightest bit intimidating, working with a horse. While you’re technically “in charge,” you should never forget that you’re working with a one tonne animal who could kill you if something went wrong, or at least kick you or throw you off. There’s something humbling to that. 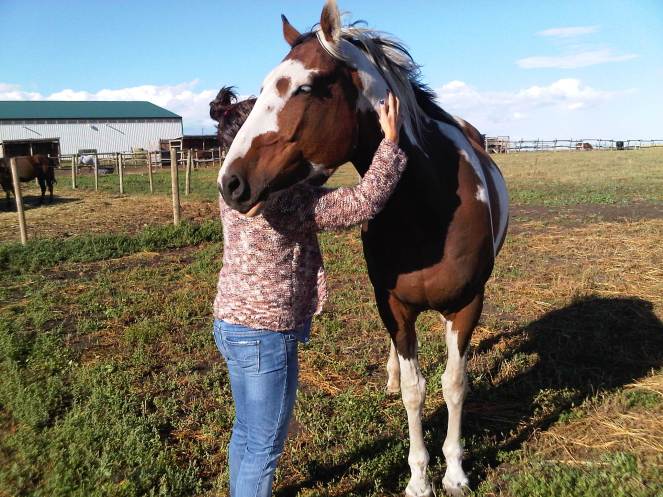 Sometime ago I was told that the Taylors had sold Miss Terrific to people who had more pasture for her to retire in. She was old, even when I knew her. It’s silly that I believed it. That’s got to be the one of the oldest lines in the book. I’m deeply grateful to her and I’m sure she’s peacefully grazing and galloping away in horsey heaven. 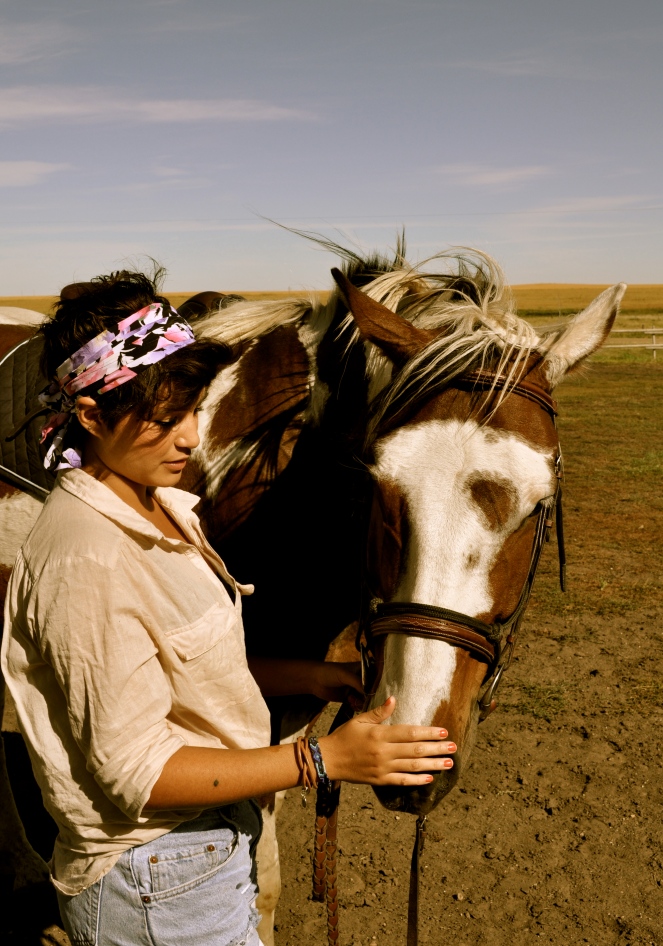