Sunday afternoon Sarah, my son Gavin, and I stopped by the Fergus Highland Games Festival.

Lots of the competitions are new to me. Tug of war is familiar, of course. But I was glad to realize, after my second or third time hearing it, that this competition was “sheaf tossing” not “sheep tossing.” 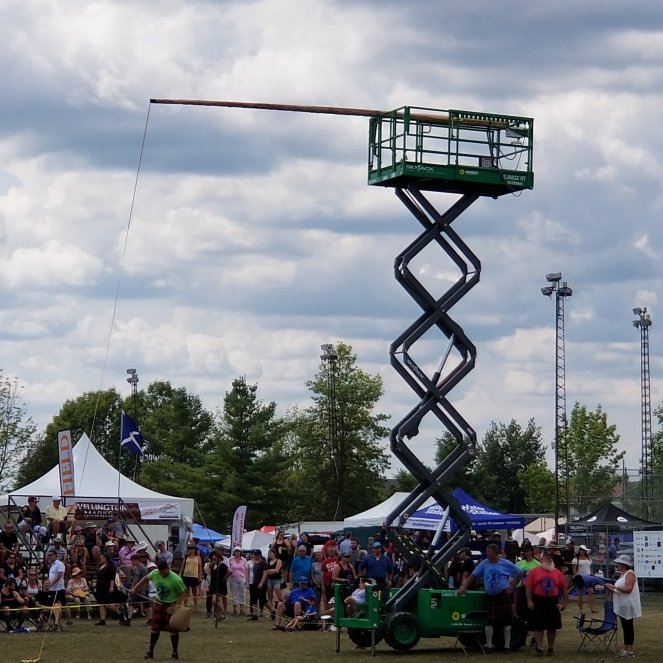 We really just wandered in to see what it was all about, hoping to catch some of the women’s competitions.

And we lucked out. We got to see Sultana Frizell, set the new women’s Canadian record in light weight for distance. The record is now 85 feet, 2.5 inches.

Later this amazing athlete set another record in the hammer throw.

I loved watching the different shapes and sizes of the competitors and seeing all of their different techniques too.

I don’t have a photo from the events yesterday but here is Sultana at the Commonwealth Games.

Just as rugby and roller derby and power lifting are on my list of sports I wish I’d tried, so too are the lifting and throwing competitions associated with the Highland Games. This blog’s Sandi does it and I love hearing her talk about it.

It’s also a lot of fun to watch. I recommend it!

Here’s Sultana talking about the stigma of being a woman who throws heavy things. She laments not being seen as an athlete but rather looked at through the lens of normative femininity. People are often commenting not on her throws but on, given her size and strength, how remarkable it is that she looks like a girl/woman.

After we watched the women’s competitions on Sunday we also wandered over to see the animals on display.

They look a little overheated. We were too.

I competed in a Women’s Masters Competition, the Victoria Highland Games, in beautiful Victoria, BC a few weeks ago. (See here for local coverage.) My husband was there for the Canadian Championships, and since I was flying out with him, I decided to get a look at the schedule to see if it made sense for me to compete as well. They had three women’s competitions going, so I signed up for one. Most of my competitions have been local and the group of women I normally compete against are friends. When I went to Key West early in the year, I travelled with one of my practice buddies, so knew at least one person on the field.

Coming into Victoria, I knew no one I would be competing against. I was competing early in the morning and my husband would be starting at 1:00, so it didn’t make sense for him to come to the field early and wait around for several hours. I had friends coming to the field to cheer me on, but not until part way through the competition.

My usual routine before competition where I could drive someplace for a good breakfast to fuel my day, hit the field at my own pace and know everyone on the field was just not possible. The evening before, I didn’t know where I’d eat, how I’d get to the field (taxis were always an option) and what kind of competition I had on the field. I always have a good time on the field, but occasionally run into imposter syndrome, possibly because of having started my athletic career at 45. I got all weirded out and nervous and all my social anxieties that I normally keep at bay came to the surface. I briefly thought about backing out.

Before going to bed the night before, I googled restaurants and found one in walking distance to the hotel that was open at 6:00am. I was informed that a ride was arranged for the next morning and I admitted to my husband that I was freaking out. He joined me at breakfast the next morning, gave me a big hug and told me he’d meet me on the field before I was done. I went to the field, put on my big girl kilt, introduced myself to strangers and started warming up.

The day was awesome. The women I competed against were all friendly and an absolute blast to spend time with. While I didn’t get much practice before the games, what I did do included some really great coaching. My throws were all great and I ended up coming in second. I was thrilled…and like usual, I made a new set of really great friends. I don’t know what I was worried about. 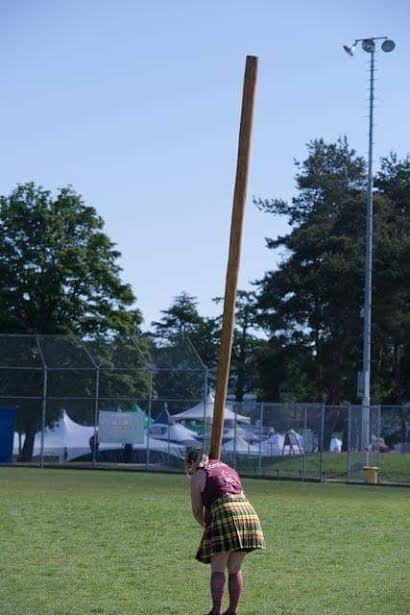 Sandi is a feminist in the throes of what some would call her mid-life crisis, having gone from exercising only her mind to lifting weights and throwing heavy objects.  Her natural curiosity and need to know everything serves her well in a career in research as well as all things health, science and well…life really.