I’ve written recently about the worries about women’s moral virtue associated with the backlash against early feminism and women on bikes in the late 1800s. (See Bicycles: Making good women go bad since the 1800s.)

However, I also find the medical condemnations of women’s cycling fascinating for what they tell us about what people thought (and maybe still think?) about women’s athletic capabilities and potential.

Many physicians held that women’s bodies simply weren’t suited to cycling. They thought that the bicycle was a sure path to sexual depravity (given the motion of the bike and the proximity of the seat to women’s genitals) and infertility (given the shaking the womb obviously endures while riding a bike). Also, our weaker natures made us prone to exhaustion.

Reading their medical reports on the dangers of cycling–one can’t really call it ‘research,’ more a mix of armchair meanderings and anecdotes–you get a clear picture of what doctors of the day believed to be true of women’s bodies.

In “The hidden dangers of cycling” by A. Shadwell, M.D published in 1897, in the journal National Review, the author advises women against “attempting a novel and peculiar experiment with their precious persons.” That “novel and peculiar experiment” would be riding bikes. He writes that the risks to women’s health include internal inflammation, exhaustion, bicycle face, appendicitis, dysentery, nervous attacks

I love this description of why biking tempts women to self-injury.

“A vice—from another point of view a virtue—peculiar to the bicycle, that I do not remember having seen noticed, is that the ease and rapidity of the locomotion tempt to over-long rides by bringing some desirable objective within apparent reach. Going to nowhere and back is dull, going to somewhere (only a few miles farther) is attractive; and thus many are lured to attempt a task beyond their physical powers.”

I love the temptation to go just a few kilometers farther and often suffer from exhaustion myself after!

Back to the list of physical ailments associated with cycling. I’ll be writing another blog post about sexual depravity and bicycle seats, but what interests me today because it’s unexpected and unfamiliar are the worries about ‘bicycle face.’

See the list of don’ts for women riders circa 1895: Don’t cultivate a “bicycle face.”

Bicycle face was an actual medical ailment of the day. In the 1890s  “bicycle face” was one of the “allegedly possible ailments” of riding a bike.  Anti-bicyclists of the time claimed it was “the product of excessive worry over maintaining balance while riding.” And of course, given our wobbliness and worry prone natures, women were especially likely to suffer from bicycle face.

For more on bicycle face, see The Science of Fear, http://www.fearexhibit.org/media/moral_panics.

When I first heard of bicycle face, I instantly thought of the look fierce concentration and effort that’s associated with bicycle racing.  Here’s the most famous race face, Jan Ullrich.  Below Jan is my race face! But I was sad to find out that bicycle face is something else altogether. 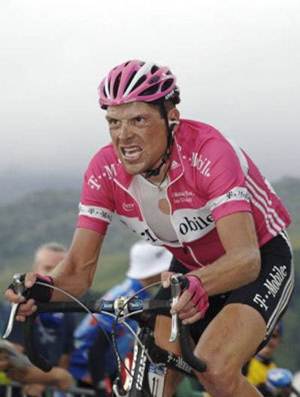 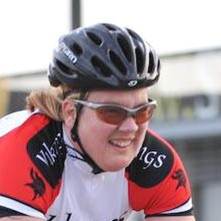