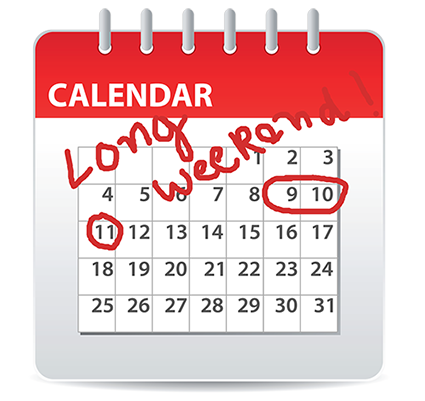 An article,”Every Weekend Should be a 3-Day Weekend” came out over a year ago and I missed it. It’s dated September 4, 2015, so I probably missed in the blur that is September. Sam wrote about the September blur and its associated challenges yesterday.

Since like attracts like, I have surrounded myself with lots of high-achieving, busy people who cram a lot into every day, week, and month. Mostly it’s women, and we all feel the crunch.

Probably the most boring but repeated conversation I have with colleagues is about how busy we all are. I read somewhere (maybe in one of those Don’t Sweat the Small Stuff books that we used to keep in the bathroom) about a phenomenon called “corporate bragging.”

What’s that, you say? I’m going on memory here, but it’s something along these lines: going on an on about how busy you are. We wear it as a  badge of honor. Hence the “bragging” label. The tone is complaining, but in the end it makes us sound important, even indispensable.

With all this work to do, it’s hard to imagine trying to cram it into a 4-day work week. I mean, when I ran into a colleague the other day as both of us were rushing from one on-campus commitment to the next, she asked me “what do you think we can do about September?”  My first two answers: 1. make it longer, 2. increase the number of hours in a day in September. Only my third answer started to get to the point: 3. Try to fit less into it.

A shorter work week with longer weekends would force us to do that. And it would be good for our health. Here’s what the research says, according to the article:

The bulk of the research in medicine, sleep, cognitive science, and organizational psychology overwhelmingly suggests that a shorter workweek should be the norm rather than the holiday-weekend exception.

People who work too much are more likely to have strokes, suffer heart disease, or contract type-2 diabetes.

But that’s not all. One of the biggest complaints I’ve had lately is about insufficient sleep. If three-day weekends were a regular thing, people would sleep more. People who work over 55 hours a week sleep a lot less than people who work fewer than 40 hours per week. The reason, researchers suspect is not just that they have more time to sleep, but also that have more time to “chill.” If you work long hours with very little space in your schedule for downtime, you miss out on relaxation, which is kind of like prep for a good sleep.

In one … experiments, [Harvard business school] researchers forced employees at a consulting firm in Boston to take a day off — totally off, no email check-ins allowed — in the middle of the workweek. After five months of this routine, the firm’s clients reported an improvement in service from the teams who took time off, as compared to the clients of the teams who worked their usual 50-plus hours per week.

We have a three-day weekend coming up for Canadian Thanksgiving, and I’m excited! One difficulty I have is that because these are not the norm, I find myself thinking about what all I can cram into it.

But the real benefit of regular three-day weekends, as far as I’m concerned, is to create some space in an otherwise over-scheduled life. The very idea seems decadent in a world where corporate bragging is a way of life.

So instead of letting my three-day weekend become a three-day chore-fest, I’m scheduling in a day of unscheduled time on Saturday: no plans, no email, no work.

And moving on from that: I’ve made a firm commitment to reduce my participation in the culture corporate bragging. Living to work is nothing to boast about. Finding space in life for unscheduled time is more of an achievement. A regular calendar of three-day weekends would help with that. And I don’t just mean for the privileged few. I mean for all income brackets and with no reduction in pay.

Do you ever find yourself caught in a negative cycle of corporate bragging with colleagues and friends? Would you welcome a shorter work-week even if it didn’t mean you were more productive?

13 thoughts on “On long weekends and corporate bragging”