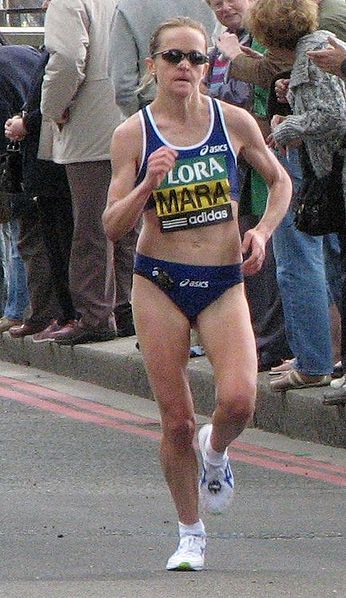 I recently attended a Project 500 Networking Day for female sports coaches called: Women in Sport – The next steps.

(Project 500 is an initiative to address the imbalance of female to male coaches in England – you can read more below, or on their website).

A major highlight of the event was the opportunity to hear a presentation by guest speaker Mara Yamauchi.

Just ahead of Mara’s presentation, the day opened with a screening of the new Project 500 More Women Better Coaching promotion. This powerful video was launched on 30 March 2016, and you can watch it here

The message of the video is that many women are using coaching skills anyway (at home and/or at work) – so why not extend that to sports coaching . . . ?

Mara is a retired British long-distance track and road running athlete, and the second fastest British woman over the marathon ever.  She spoke to us about her experiences as a female athlete, and her more recent move into coaching.

We heard about Mara’s exciting childhood in Kenya and Oxford (where she was always outside and playing sports!) and her entry into serious athletics training once she started university.

After graduating, Mara joined the civil service (working in both the UK and Japan) for ten years, while training in her spare time, whenever she could fit it in. However, since she was a little girl, she’d always really dreamed of competing in the Olympics. Around the age of 30, Mara realised that time was passing her by, and that she had to pursue her dream – or lose it forever. She therefore dropped down to part-time hours in her job – and went for it.

Mara didn’t make the GB team for the 2004 Athens Olympics, but she kept at it, and in 2008 she came sixth in the Beijing Olympic Marathon. Her dream of being an Olympian had come true!

In 2009, Mara also achieved Runner-up in the London Marathon in 2:23:12. This is still the second fastest marathon time ever by a British woman

Mara retired from professional running in 2013 and decided to use her talents and experience as a coach. She shared with us what it felt like to go from being an elite athlete, to being quite a “beginner” in the field of coaching, and some of the lessons she has learned along the way.

For example, she’s come to question the popular belief that to be a great coach, you have to have been a great athlete. In fact, Mara explained that in her view, coaching requires a completely different skillset.

As an athlete, your life can be very regimented, and you’re “told what to do” a lot of the time. But Mara has found being a coach completely different. It’s more creative and personal, and takes a lot of “softer” skills such as motivating and engaging people.

Mara has also discovered through coaching, that people’s motivations for doing sport are really diverse – and can be surprising. Often, they are nothing to do with the sport itself, but are more to do with relaxation and escapism from a stressful job, or a demanding family life.

Culture and social support structures are really important. Mara has no doubt that an important factor in her success was because she lived in Japan. Japan has a rich, gender-balanced marathon scene, with up to several thousand athletes training full-time at any given time, as opposed to just a handful in the UK.

This means that runners can access a lot of mutual support, and opportunities to share knowledge on training regimes, diet and so on.

After Mara’s presentation, she led a group discussion on ways to engage more women in sport. Watch out for part two of this post, which outlines the topics we covered . . .

About Project 500: Project 500 started life in 2013 as an exciting initiative in the South East of England, to help address the imbalance of female to male coaches by recruiting, developing, deploying and retaining 500 female coaches.

Research from sports coach UK shows that just 30% of sports coaches are female and of newly qualified coaches each year, only 17% are women.

The initial two-year pilot was really successful, and recruited and retained over 530 female coaches across a variety of sports.

In celebration of this – and with an eye to the future – Coaching Hampshire and Active Surrey held a women-only networking day on 13 March 2016, which I attended on behalf of my dojo. Mara’s presentation was part of the day’ programme.

Image credit: Mara Yamauchi at Mile 24 and a half of the 2009 London Marathon, along Mid Temple right by Temple Place. By Mara_Yamauchi_2.jpg: SNappa2006 derivative work: Omarcheeseboro [CC BY 2.0], via Wikimedia Commons.

Martial arts blogger, with a special focus on women's experience of and participation in the martial arts. You can find my blog at www.budo-inochi.com/archive and like/follow my facebook page: www.facebook.com/kaimorg View all posts by kai_morgan