I was tired of seeing unrealistic photographs of women breastfeeding, so I took a photo of myself breastfeeding my baby, posted it on Facebook, and asked if other women would like to be photographed in the same way. I was inundated with responses, and so the project began!

In the media, I feel there is a distinct lack of authenticity in images of women breastfeeding. Most photos are highly stylized, airbrushed and unrealistic; many are sheer fantasy. Whether it is the angelic mother in her clinical white perfection or some model on the front of a fashion magazine. I’m tired of images that fail to show the realities of breastfeeding for most women.

This is about empowering women. This is about the amazing thing that only we, the women humans of this earth, can do; sustain another humans life with our own.

Well, my name is Kath and I recently turned 43 years old.  In my day job I’m an IT librarian in Brisbane, but by night (well, it’s not restricted to just night any more!) I love to put on my rainbow tights and sparkly dress and have been a fat activist for about six years now.  Mostly I concentrate on the rights of fat women, because I am royally fed up with being treated like a second-class citizen because of my size, but I do believe that every day things like the access to attractive clothing and being represented in a positive light as a fat woman are actually radical acts of fat activism.  Not apologising for who I am is one of the most powerful things I have learned to do. 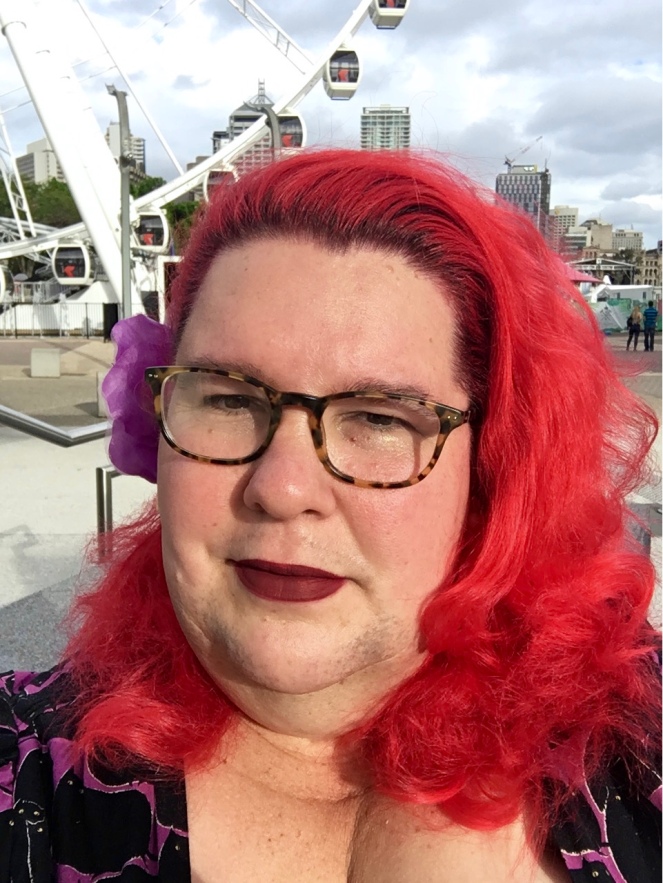 Inside the league of lady wrestlers

This is not your typical retirement party. There are three hundred of us gathered at Gibraltar Point on Centre Island, a 20-minute ferry ride and 30-minute walk away from Toronto. The sun has set. Lights are strung over the treetops. Cans of beer are in hand. The scene would be romantic were we not all standing around a dirty, beat-up wrestling ring.

Tonight’s guest of honour is Big Jody Mufferaw. Her name is a tongue-in-cheek play on Ottawa folklore legend Big Joe (forever immortalized in a Stompin’ Tom Connors song), and Jody is a lumberjack with a penchant for battle. For the past three years, she has been the face of the League of Lady Wrestlers. Ironically enough, there’s nothing particularly “big” about league founder Aubyn O’Grady, who plays Jody. When the announcers introduce her, she crawls into the ring and her head barely peeps over the top rope. While she speaks, she swings a foam axe around; I hold my breath in fear that she might wind herself.

Cindy Crawford has one of the most recognizable faces in the world. As one of the first supermodels, the farm girl turned fashion icon rose to unprecedented heights.

Now, as she approaches her 50th birthday, Crawford has released Becoming — a collection of images and stories about her colourful career, her iconic mole, and that famous Vanity Fair cover with Canada’s k.d. lang.

Crawford joins guest host Rachel Giese to explain why she feels more confident than ever and why she tells young people to re-think the thing that makes you self-conscious. “That could be your trademark.”

50 small things you can do everday to love yourself

When we love ourselves, it helps us feel our best, and when we feel our best, we can give more to the world. Treating yourself well, and with love, is more than eating healthy and exercising.

What exactly is self-love, though? In Psychology Today, Deborah Khoshaba, Psy.D. writes, “Self-love is a state of appreciation for oneself that grows from actions that support our physical, psychological and spiritual growth. Self-love is dynamic; it grows by actions that mature us.”

She explains the profound effects of self-love, stating, “When we act in ways that expand self-love in us, we begin to accept much better our weaknesses as well as our strengths, have less need to explain away our short-comings, have compassion for ourselves as human beings struggling to find personal meaning, are more centered in our life purpose and values, and expect living fulfillment through our own efforts.”

Learning to love your body

Every day in my role as Executive Editor at a women’s website, I receive pitches about “learning to love” various parts of one’s body. There are women who want to write about learning to love their thighs, their freckles, and that spot where the thigh meets the butt. Some women have learned to love their thutts.

I know what these women mean. Because we are conditioned to hate our bodies, our quest to become actualized healthy adult women naturally involves years of deprogramming ourselves of the messages we’ve internalized about our bodies. We call this “learning to love” ourselves, which includes our body parts that we have wasted years hating.

But here’s the thing — I don’t love my body, and I don’t think I should have to. Both loving your body and hating your body involve putting much more thought into each individual cross-section of your human suit than one should rightfully need to

31 Hilarious Tumblr Posts That Only Feminists Will Get

How To Love A Sexual Partner With Body Image Issues

It’s not uncommon to be matched up in the bedroom with someone who has body image issues. Sometimes they’ll be upfront about it. Sometimes they won’t, but you can sense it anyway. If you’re attracted to your sexual partner despite their insecurities, there are some things you can do to make sex more enjoyable for them — even if they’re thinking about their “imperfections” when the clothes come off.

In the following list, I use she/him pronouns because I am a heterosexual cis­female, but insert the pronouns work for you. Everyone deserves great sex.

Famous Women Get Real About Menstruation To Combat Period-Shaming

With the help of a few celebrities, Thinx wants to end the stigma surrounding periods.

Actresses Sophia Bush, Joy Bryant and Jackie Tohn kept it real while talking about menstruation during the opening of a mini documentary from Thinx, the period-proof underwear company that ran into obstacles when trying to get its ads approved for New York City’s subways.

Bush, in particular, touched on the way society discusses periods. “It’s all so technical and creepy the way they talk to us about it, that the lining of the uterine walls is sloughing,” she said. “That’s … gorgeous.”

Later, Tohn mentioned the shame that comes with menstruation. The actress and singer shared her disappointment that such a natural thing isn’t talked about openly.

We also know that doing novel things with romantic partners, rather than the same routine activities, increases intimacy. Brain scans of 53 middle aged married couples revealed sharing novel activities triggers the brain’s reward system and floods it with dopamine and other feel-good chemicals.

This is similar to what happens in the brain during the beginning stages of a relationship. These are the same chemicals that keep the smile on our faces and butterflies in our tummies when we experience new love.

Inbetweenie, life-size and curve: the language of plus-size modelling

Nothing inspires the use of angry caps lock on social media like the combination of women’s bodies and the fashion industry – and Twitter outrage around the term “plus size” has recently been in boundless supply. To wit: many campaigners have been calling for an increased use of larger models. Others have complained that plus-size models are not plus-sized enough. Still more have accused those initial campaigners of “skinny shaming” and promoting obesity while, apparently, “curve” models and “inbetweenies” are on the rise. All in all, the bodies of plus-size models are becoming as much a source of debate and ire as those of their “straight-sized” counterparts. Progress, eh? And if you have no idea what any of those terms mean, here’s a quick guide.

One thought on “Fit is a Feminist Issue, Link Round Up #60”