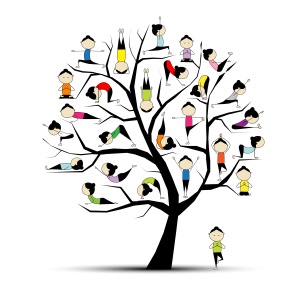 A rant with the wonderful title “Namaste Bitches” came our way yesterday. I love the juxtaposition of the traditional yoga closing “namaste” — translated from Sanskrit to English it means something like: “may the light in me honor the light in you” — with the aggressive dissing, “bitches.”

So what is the author’s complaint?  Well, it’s a resentful diatribe against “the bullshit that has tarnished the beautiful practice of Yoga, the real benefits of eating for health and the elegance of living a more gentle, inclusive life.”

The lightning rod for her misery is the yoga studio. Yoga, according to her dictionary, is supposed to be this:

Yoga: a Hindu theistic philosophy teaching the suppression of all activity of body, mind, and will in order that the self may realize its distinction from them and attain liberation.

We’ll overlook for now that it’s a bit more complex than that and that it depends which dictionary you consult. But the kind of yoga we’re most fixated on in the West (and in this article) is the physical kind of yoga, namely, hatha yoga. We short-form that to “yoga” in this part of the world, and maybe that’s part of the problem. But that’s for another day.

The complaint is that her yoga studio, far from attracting practitioners who are interested in this peaceful liberation of self, is a magnet for mean girls.

If you have been to a Yoga studio, you know what I am referencing, you have heard them. Sadly, sometimes the instructors are just as shitty. Yoga is a practice, not a fucking competition. I should be able to forego the $200.00 yoga pants and show up in whatever the hell I please. I should be able to gradually improve the yoga postures as my body strengthens and not feel intimidated by the voices of the Namaste Bitches in the back, muttering about how they should have different classes for people who are not very good at yoga. As God is my witness, the next time I hear anything like that directed at me or anyone in the class, I will purposely turn around and raise my middle finger and utter in the most peaceful voice; “Namaste this, Bitch”.

When we posted this on our Facebook page yesterday, the vast majority of people said, “that has not been my experience.” Nor has it been mine.  And I don’t know that I would continue to frequent a yoga studio where more experienced students tried to shame the novices.  It’s not just “not yogic.” It’s rude and disrespectful.

Of course not everyone who takes a yoga class is full of respect and non-judgment for those around them. But seriously, maybe try a different studio if the one you go to gets you that riled up.

I started doing yoga way back before it was trendy.  You couldn’t buy $100 yoga pants when I started, let alone $200 yoga pants.  Every year my instructor took our orders for black Danskin leggings, we gave her our size and our cheques. She got a bulk discount on the shipping. And then a few weeks later, after we’d all but forgotten, the delivery arrived and we all got our new yoga pants.

The proliferation of yoga studios and yoga fashion kind of crept up on us through from the mid- to late-2000s to now. I get that there are lots of things to rant about whenever something pure and sacred has much that is good commodified right out of it.

After over a decade of Iyengar yoga, taught by an exceptionally experienced teacher according to the strict requirements of Iyengar certification (I’ve written about the quality of instruction here), I had some difficulty grasping the approach at the local hot yoga studio. What was the problem?  They had no sense of levels.

Now don’t get me wrong. It didn’t matter to me for my own practice that there were people with hardly any experience taking the classes. It didn’t matter because everyone did the same sequence every class anyway.

But having come from the Iyengar method, I had grown accustomed to working my way through levels, each of which had a slightly different curriculum.  The beginners didn’t do headstand or full-arm balance, for example. And it took some time to work our way to full back-bends. Instructors in the method need to keep advancing in their certification. As they progress in their qualifications, they are permitted to teach more advanced curriculum.

So unless it’s a special workshop day, you just wouldn’t find a lot of people at different levels of practice taking the same classes. That’s not about competition. You don’t need to be competitive to want a class that’s appropriate to your level of experience.

From what I’ve witnessed, novice and advanced students alike feel better in classes geared to their abilities. Yoga is no different from any other physical practice in that it’s a set of skills learned over time. The idea of doing the exact same class with all different levels of experience runs counter to that approach, as if everyone at all times is prepared to do any of the postures.

The more I practiced in the Iyengar tradition, the more I realized just how vast and deep even the physical practice of yoga is, never mind all of the other levels of teaching.

And you can really hurt yourself if you do it wrong. When you have an all-levels class with a potentially inexperienced instructor who just goes through a sequence as if it is an aerobics class, there is a huge possibility that someone is going to get injured.

So while I can definitely get behind the “Namaste Bitches” ranter’s disappointment that there are judgmental mean girls in her yoga studio, I think there are all sorts of good reasons for offering different levels of classes that respond to the different needs and abilities of students.

It’s safer and it respects the idea of yoga as an on-going practice in which students gain insight, understanding, skill, and ability over time, with adequate instruction geared to their level of experience.

8 thoughts on “Why Yoga Needs Levels”