Fat-shaming new moms is even more toxic than you think

When my daughter was born, I had recently finished writing a book about how to make peace with your body before and after baby. My co-author was already a parent at the time; I was the “expert” voice, having spent my entire adult life working in the field of eating disorders awareness and body image education. I had personal experience, too, as so many of us do. Struggling with eating disorders through high school and college, I spun frantically and fruitlessly on that hamster wheel of perfectionism. Thankfully, I got better. And along the way, I understood that while my illness was a complicated cocktail of contributing factors, the constant glorification of thinness around every corner and on every page and screen was not some superficial side note. It was a very big deal.

Leaving aside the issue of the body mass index, and whether a single number can determine health in a wide variety of women and body types, it’s the assumption, widely articulated in the coverage of the proposed law, that fashion models promote excessive thinness in the general population that seems to me a flawed premise.

It takes as a given that young women receive their body image cues from models, especially at-risk models. (It is colloquially referred to as a “skinny model law” after all.) But a quick trip through the social media universe would suggest that the women with the most influence are not, in fact, models.

“Our ‘I’m No Angel’ campaign is designed to empower ALL women to love every part of herself,” Lane Bryant Chief Executive Officer Linda Heasley said in a statement. “Lane Bryant firmly believes that she is sexy and we want to encourage her to confidently show it, in her own way.”

Backing the campaign, “real” women on Twitter have been celebrating the idea that perfect really isn’t so perfect, and that being happy and healthy in your own skin is more important than anything else. 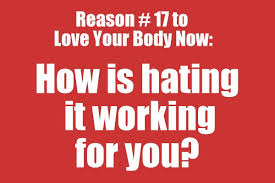 There’s a predictable social media formula for what women’s pictures online should look like. Breasts in barely-there bikinis are good (thumbs-up emoji, even), but breasts with babies attached them are questionable. Women wearing next to nothing is commonplace, but if you’re over a size 10 your account may be banned. Close-up shots of women’s asses and hardly-covered vaginas are fine, so long as said body parts are hairless.

And now, in a controversy that once again brings together technology, art, feminism and sex, Instagram is under fire for removing a self-portrait from artist Rupi Kaur that showed a small amount of her menstrual blood. Apparently having a period violates the site’s Terms of Service.

The broader message to women couldn’t be clearer: SeXXXy images are appropriate, but images of women’s bodies doing normal women body things are not. Or, to put a more crass point on it: Only pictures of women who men want to fuck, please.