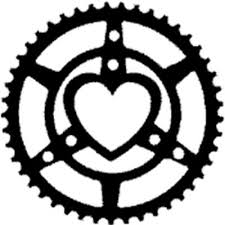 Or, really, honestly, this post could be titled “Six Hundred Things I Love about Cycling and Some Grumbles” but I’ve started a trend with “six things” posts about Aikido, Rowing, and CrossFit so I’m sticking with the formula.

What do I love?

1. Speed: I love going fast on my road bike. (Okay, I love going fast on any bike but it’s best on my road bike.) Speed feels good. I think that’s why I can push really very hard on the flats but much less hard on hills. I’ve compared heart rate, speed, and incline data lots wondering why I can’t work so  hard on hills. It’s not just that I’m physically unsuited for hills (I’m too big) I think it’s also that I’m psychologically not a climber. I like the quick rewards on the flats better. I’m not the Queen of Patience. Zoom!

This puzzles people who know me well, my love of speed on the bike and my willingness to work for it, because I’m not naturally a speed demon. I drive slowly for example and motorbikes have never tempted me. I have no good explanation for this but it’s fun so I enjoy it.

2. Different people can be good at different things: See above. I’m no climber. Hills hate me and I hate them back, especially long hills. Short steep hills I can power up and over but long climbs suck the life out of me. I know I’ll lose a race if it has hills. It’s that simple. I’ll be battling to finish. But what I love is that some of the people who beat me on hills, I can easily beat them in a crit race or a flat time trial. Even within  events we can be good at different aspects of that event. When I was racing crits with the Vikings cycling club in Canberra, I found there was a role I could play.

I like this passage from a race report on a crit race in Canberra: “Women’s C saw a few attacks come from Bike Culture girls Katie Conn and Amy Eichner, but the Vikings crew had everything covered, with domestique Sam Brennan saying “uh-a”. Megan Pitcher winning the sprint over fantastic debutante junior Alice Wallett, watch out for Alice in the last part of the season.”

I wasn’t our team’s best sprinter but I was pretty good at bridging the gap between packs, leading our faster riders up into the breakaway. In this style of racing it doesn’t matter so much where I personally finished in the race. What mattered was getting our faster riders up into the front pack so that someone from our team was in the final sprint.

3. Lots of sports within cycling: There are lots of different tribes within cycling and you can move from one to the other. Read the Bike Snob’s Guide to Cycling’s Tribes. I’ve competed in criterium races and road races and time trials. I’ve ridden on the track too and raced a bit there. I haven’t done much with the mountain bike I own but I’d like to ride in a cyclocross race sometime in the future. Moving from one sub speciality to another is also a great excuse to buy another bike. And cyclists always want more bikes. I’d love a funky pastel cruiser, a cargo bike, and a time trial or tri bike. See How many bikes is too many?

5. Holidays with bikes: My favorite holidays have been on my bike. It’s just the right speed at which to see a new part of the world. There’s fitness arguments and training arguments sure, but really it’s just a very pleasant way to get around on holiday. You meet more people and see more of where you’re visiting. I’ve ridden all over the place: Amsterdam, New Zealand, Newfoundland, Arizona…read more about that here and here.

6. Coffee and friendship: I also love bike rides as a great way to spend time with friends. Ride into the countryside, drink coffee and eat brunch and ride home. Is there a better way to spend a Saturday?

What do I grumble about?

1. Attitude: There is a kind of smugness among cyclists that can be a bit wearing. On behalf of us all, I apologize. There’s also a tendency to make divisions and create hierarchies that serve no useful purpose other than creating in groups and out groups. See Road cyclists are to bike riding as analytic philosophers are to philosophy: Discuss

4. Male egos and cycling sexism: Pro cycling is horribly sexist and that attitude and culture can permeate all the way down to the club level. Read Bike races and podium girls: Time to kiss goodbye? to get a taste of this. I will say though that I’ve encountered very few men with bad attitudes to women riders. That’s partly self selection, I know. Feminist philosophers tend not to attract sexist riding companions. At the level of the local club I’ve met some incredibly supportive men who devote a lot of time, energy, and thought to creating an inclusive environment for cycling. (Hi Simon, Hi Mark) I hate seeing their hard work undone by social sexism and I’m sad to say that still exists.

5. In group spats and feuds: If I was going to be snarky on my list of things I don’t like, I’d add “triathletes” and all my roadie friends would chuckle knowingly. Triathletes have a bad rap among road cyclists for their bike handling and group riding skills.  (Don’t believe me? See Why Cyclists Hate Triathletes and watch Road Cyclist Meets Triathlete.) But, you know, bike handling and group riding, aren’t really elements of the triathlon. So there’s a perfectly reasonable explanation as to why some triathletes aren’t good at these things. If this were the only instance of feuds between the tribes it wouldn’t be so bad but I’ve also heard mountain bikers mock male road cyclists for their shaved legs and fear of rocks on the road.

Here’s Eldon Nelson, the Fat Cyclist, explaining to mountain bikers who want to ride on the road sometimes what they need to know about the difference between the two activities:

“The terrain is different.When you are mountain biking, you naturally are inclined to look for interesting obstacles to ride over — roots, rocks, fallen logs are all part of the fun. On a road bike, on the other hand, anything but perfectly smooth pavement is a potentially life-threatening danger, and must be avoided at all costs. Further, if you are ahead of another cyclist, you must use elaborate hand gestures to indicate that there is — horrors! — a pebble 75 metres up the road.”

He’s actually a very funny guy. You should read the rest of Tips for Becoming a Roadie. I think it’s kind of hilarious.

So I get that it’s good natured banter, very funny ribbing of the other guys, and yet, it’s often tinged with something more. I like lots of different kinds of riding and I try to stay clear of this stuff. Except Eldon Nelson. I eat his stuff up.

6. Flat tires: I love bikes and mostly I love the gear. But having to inflate my road tires each time I ride is a pain and fixing flats is a bigger pain. I think all cyclists hate flats.

How about you? What do you love about cycling? What aspects of cycling aren’t your cup of tea?